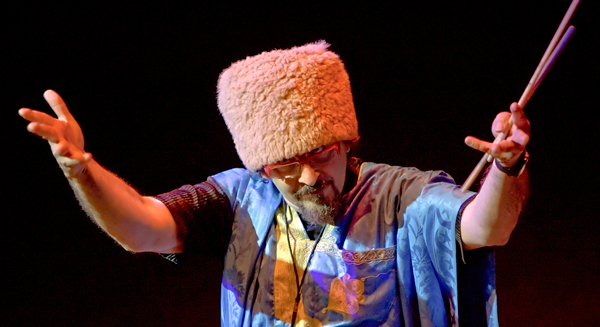 Fri, Jul 14th 2017 04:25 pm
Famed Brazilian percussionist Cyro Baptista will be in residence at the University at Buffalo July 18-30 as part of the university's Creative Arts Initiative.
Baptista will offer a multilevel program that includes workshops and a free concert in the Percussion Garden inside Artpark at 4 p.m. Sunday, July 30. That event features "Beat Blossom," a new public art installation, created in collaboration with Buffalo-based artist Shasti O'Leary Soudant, which functions as a musical instrument.
The concert will be the culmination of Baptista's daily workshops that he's calling "Sound of the Community." The free three-hour workshops, with collaborator Billy Martin of the progressive jazz funk band Medeski Martin & Wood and pianist-composer Brian Marsella, will run July 24-29 beginning at 5 p.m. at Artpark's Emerald Grove stage, just north of the courtyard and ticket windows at 450 S. Fourth St., Lewiston.
The workshops are open to all. Instruments will be provided, but participants may also bring their own. Advanced registration is requested by emailing [email protected].
"The central idea is to utilize percussion as a musical language that will attract and engage different layers of the community," Baptista said.
The concert marks the official opening of the installation and, along with Baptista, Martin, Marsella and other workshop participants, will feature Thomas Kolar, associate professor in the UB department of music and director of the university's percussion ensemble.
Baptista is among the most revered percussion artists in contemporary music, having performed on five Grammy Award-winning recordings. As a multi-instrumentalist, he combines a prolific imagination with a diverse and theatrical approach that has seen him share concert stages and recording studios with musicians whose styles range from Melissa Etheridge to Wynton Marsalis and James Taylor to Yo-Yo Ma.
Baptista's desire to work with community members fits nicely into Soudant's art practice, which she said focuses, at this point, exclusively on public art.
The two quickly began exchanging ideas following an initial online introduction.
Their collaboration started with a shared goal of engaging the public. Baptista explained the kinds of instruments that capture his attention, while Soudant began to conceive of a playable public artwork based on that affinity.
"The challenge became making something with many capabilities in a single object that many people can play at once that is joyful and fun to look at," she said. "I'm deliberately going for the invitation for engagement - Beat Blossom is an invitation to climb inside and hear what it can do."
Soudant's inspiration, in part, derives from the Indonesian gamelan, an ensemble of mostly percussion instruments. Beat Blossom takes from its forbearer the idea of a collective experience, but it is a single instrument with different stations and brings new sonic potential to its varied strike surfaces made of metal, wood and multiple textures.
Beat Blossom, in fact, might serve as a metaphor for the resourcefulness reflected in Brazilian musical culture where instrumentalists combine objects in any way possible to realize their art.
"It's an extraordinary act of defiance in many ways," Soudant said. "The need to make music will be something that will be manifest whether you have the ability to buy an instrument or you're playing an upturned bucket as a drum."
"That's great drive and I feel lucky that I was able to do this," she added.
Categories
Entertainment NFP Top Around WNY Feature Top Entertainment News