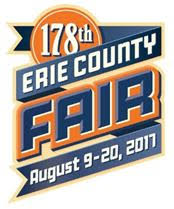 Singer, songwriter and dancer Derulo has sold over 50 million singles worldwide and has worked alongside a variety of artists, ranging from Demi Lovato to Snoop Dogg. Derulo has racked up 3 billion views between YouTube and Spotify with his mix of pop, rhythm and blues, and hip-hop. He was honored in 2011 as BMI's Songwriter of the Year and has written hits for artists such as Lil Wayne, Pitbull, Sean Kingston and Diddy.

Carpenter has starred on several television shows, including Disney Channel's "Girl Meets World" and "Milo Murphy's Law." She won Radio Disney Music Awards in 2015 and 2016. Last year, she embarked on her first-ever headlining tour, playing sold-out shows in more than 35 cities across the U.S. Carpenter's current single, "Thumbs," has been streamed more than 150 million times, and is her first song to appear on the Billboard pop charts.

At the Erie County Fair, Carpenter will be joined by show opener Alex Aiono. He is well known for his videos on social media, which have amassed over 520 million views and can boast 2.7 million followers. He released his first single, "Work the Middle," this past February and released a follow-up single, "Question," in April.

About the Erie County Fair