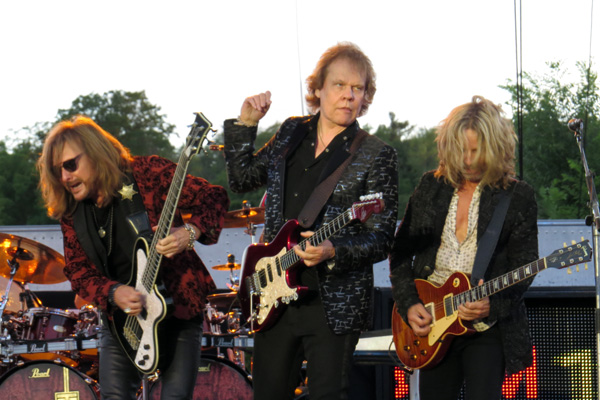 The Seneca Niagara Events Center will rock with the Motown grooves of Gladys Knight on Saturday, June 10 (8 p.m.), and "A Night at the Disco" featuring The Village People, Sister Sledge, Rose Royce and The Trammps on Saturday, June 24 (8 p.m.) Then, the music will crank up when Seneca Niagara presents "United We Rock," a special outdoor concert featuring Styx and REO Speedwagon on Friday, Aug. 18 (7 p.m.).

Tickets for all shows go on sale this week, at noon on Friday, March 24.

Gladys Knight is one of the most acclaimed performers in the history of popular music. A seven-time Grammy winner, Knight has enjoyed No. 1 hits on the pop, gospel, R&B and adult contemporary charts during her storied career. She rose to stardom with Gladys Knight & The Pips, and provided the voice to some of the most memorable songs of all-time, including "Neither One of Us (Wants to be the First to Say Goodbye)," "Best Thing to Ever Happen to Me" and, of course, "Midnight Train to Georgia."

"A Night at the Disco" brings together four of the disco era's biggest names for one swinging night (age 21-and-over admitted). The Village People are synonymous with dance music and the one-of-a-kind "Kings of Disco." Their energetic performances and choreography, famous costumes, and hits such as "Macho Man," "In The Navy" and "YMCA," have helped the Village People sell more than 100 million records worldwide.

Sister Sledge ranks as one of the top female groups of all-time. The group's hits include "He's the Greatest Dancer," "Frankie" and the seminal "We Are Family." Sister Sledge has amassed a popular following around the world, selling more than 15 million albums and garnering multiple Grammy Award nominations.

Rose Royce has entertained audiences across the U.S., Europe, Japan and Australia in a career filled with fun, funk and hit songs - some of which have been covered by the likes of Madonna, Mary J. Blige and Beyoncé. The group is best known for '70s classics "I Wanna Get Next to You," "Wishing On a Star" and "Car Wash."

The Trammps, featuring Earl Young, have provided the soundtrack to many a dance party. Bursting on the scene in the 1970s, The Trammps gave the world such disco favorites as "Disco Party," "Hold Back the Night," "Hooked for Life" and the quintessential disco anthem "Disco Inferno."

Styx is one of the greatest power pop-rock bands of the era. For more than 40 continuous years, they have been a rock radio mainstay with songs such as "Lady," "Come Sail Away," "Babe" and "Too Much Time on My Hands."

REO Speedwagon ranks as another legendary arena rock band. The band was unstoppable through the '80s, with 13 Top 40 hits and three No. 1 songs: "Keep On Loving You," "Take It on the Run" and "Can't Fight This Feeling."

This show promises to be one of the hottest get-togethers of the summer. Pre-sale tickets are available starting at noon today (March 21) via Ticketmaster. General tickets go on sale at noon on Friday and start at $45.

Purchase tickets for Seneca Niagara/Bear's Den shows at 8 Clans or the club store inside Seneca Niagara Resort & Casino, online at www.ticketmaster.com, at any Ticketmaster location, or by phone by calling 1-800-745-3000.

An eclectic slate of performances was announced on Tuesday for the Bear's Den Showroom at Seneca Niagara Resort & Casino. The shows highlight the diversity and intimacy that make the 440-seat theater one of the region's most unique performance venues.

Comedians Nick Di Paolo and Big Jay Oakerson kick things off on Thursday, June 1 (8 p.m.), as part of "The Barrel of Laughs Comedy Series." The one-of-a-kind show "Divas" starring Frank Marino takes over the Bear's Den on Friday, June 9, and Saturday, June 10 (8 p.m.). Violinist Jean-Luc Ponty will perform on Friday, June 23 (8 p.m.). Finally, illusionists and "America's Got Talent" stars The Clairvoyants will mesmerize the crowd for a pair of shows on Saturday, June 24 (7 and 10:30 p.m.).

Tickets also go on sale at noon on Friday.

Purchase tickets for Seneca Niagara/Bear's Den shows at 8 Clans or the club store inside Seneca Niagara Resort & Casino, online at www.ticketmaster.com, at any Ticketmaster location, or by phone by calling 1-800-745-3000.

A lineup of music legends are making their way to Seneca Allegany Resort & Casino, the Southern Tier's premier resort destination. The newly announced shows include "The Breezin' & Breathless" Tour with George Benson and Kenny G performing in Seneca Allegany Events Center on Saturday, June 3 (7 p.m.). Boz Scaggs will take the events center stage on Friday, June 23 (7 p.m.). Then, the hills of Salamanca will rock when the legendary Hank Williams Jr. performs a special outdoor concert on Saturday, July 1 (7 p.m.).

Tickets for all shows go on sale at noon on Friday.

Since his start with the Steve Miller Band, Boz Scaggs has been recognized as one of America's most talented musicians. His hit songs include "Lowdown," "Lido Shuffle," What Can I Say" and "Look What You've Done to Me." His album "Silk Degrees" is an all-time classic.

Hank Williams Jr. is one of the best-selling artists in country music history, thanks to the blend of country, southern rock and blues. His name is synonymous with country music, and his litany of hit songs include "Family Tradition," "Born to Boogie," "My Name is Bocephus," "A Country Boy Can Survive," and "All My Rowdy Friends Are Coming Over Tonight."

Kick-off the July 4 weekend with one of America's most iconic performers. Tickets start at $45.

Purchase tickets for Seneca Allegany shows at The Logo Shop, www.ticketmaster.com and all Ticketmaster locations, or charge by phone at 1-800-745-3000.

Seneca Allegany Resort & Casino is nestled at the foot of the Allegheny Mountains along the New York/Pennsylvania border, and is located off Exit 20 of Interstate 86 near U.S. Route 219. More information is available by calling 1-877-8-SENECA (1-877-873-6322) or visiting www.SenecaCasinos.com.