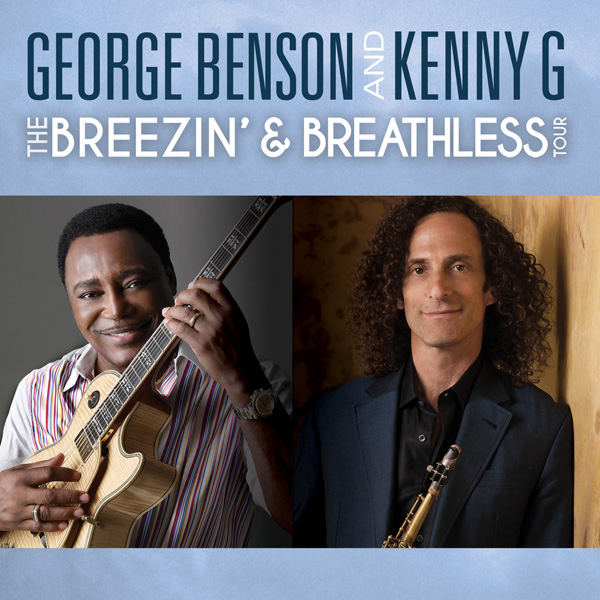 World-renowned jazz superstars George Benson and Kenny G are teaming up for a historic co-headline touring event where each will perform songs from their career defining album as well as greatest hits.

The "Breezin' & Breathless" Tour comes to the Seneca Alleghany Event Center on Saturday, June 3. Tickets start at $45, and go on sale at noon Friday, March 24. Click to GET TICKETS.

It's been 40 years since jazz visionary Benson released the groundbreaking, Grammy Award-winning album "Breezin.' " The record sold over 3 million copies and topped the jazz, R&B and pop Billboard charts.

Meanwhile, it's been 25 years since Kenny G, the most celebrated instrumental musician of the modern era, debuted the Grammy Award-winning album "Breathless." That album sold more than 12 million copies in the U.S.

Benson and Kenny G, combined, have sold over 125 million albums worldwide, earned 11 Grammys, and recorded 15 No. 1 albums and 10 No. 1 singles.

"Kenny, Kenny G that is, is a refined instrumentalist with a lot of wonderful ideas that have connected with millions around the world," Benson said. "He is a master of the soprano sax. I always enjoy when we get an opportunity to work together, and I look forward to a very successful tour."

"To say I'm honored to share the stage with one of the greatest musicians in the world would be a huge understatement," Kenny G said. "George Benson has always been a jazz hero to me with a virtuosity that is second to none. In the past, I was very fortunate to have had the chance to perform with him, but doing an extended co-headline tour together is truly an honor and a privilege. I can't wait to experience the magic that I know will be there each night."

Benson had some inroads as a funk-jazz guitarist on the popular '70's label CTI, but it was "Breezin'," his 1976 Warner Brothers debut, that lifted him to pop stardom. A Stevie Wonder-ish vocal rendition of Leon Russell's "This Masquerade" was irresistible ear candy for top 40 listeners. Fans who primarily listened to rock or soul fell by the millions for the rest of the album, too. Over the light grooves of the title track (penned by R&B great Bobby Womack) and "Six to Four," Benson showed he'd hardly abandoned the fleet fingering of his previous work as a bandleader and Miles Davis sideman. "Breezin' " was ultimately certified triple-platinum, hitting No. 1 on the Billboard album chart in 1976.

Benson also releases a sultry version of "On Broadway," and the irresistible "Give Me the Night" (written by the late, great Rod Temperton and produced by Quincy Jones).

"Breathless" was the sixth studio album by saxophonist Kenny G. Released in 1992 on Arista Records, it reached No. 1 on the contemporary jazz albums chart and No. 2 on the Billboard 200 and R&B/hip-hop albums charts. The track "Forever in Love" won a Grammy for Best Instrumental Composition at the 1994 ceremony and reached No. 18 on the Billboard Hot 100. The album has been certified diamond for sales of over 12 million copies in the U.S., making it one of the top 100th best-selling albums in history.

The "Kenny G Breathless VIP Experience" is available now at www.kennygVIP.com. Kenny G has partnered with CID Entertainment to offer VIP experiences on tour. Packages include premium reserved seating in the first five rows, plus a meet and greet and custom "Forever in Love" sheet music and folder signed by Kenny G. For full package details, visit www.kennygVIP.com.