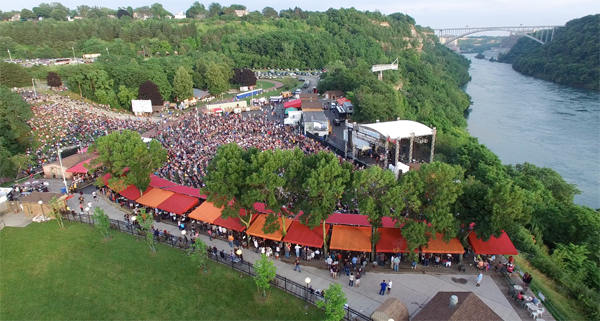 'KeyBank presents Tuesdays in the Park'

"As the cultural gem of our state park system, Artpark is a truly special place for all of us who live in Western New York," said Buford Sears, KeyBank Buffalo Region market president. "Given our deep roots in New York state, where KeyBank was founded 190 years ago, Western New York and Niagara County, it's a privilege to partner with Artpark as we continue our commitment to making transformational investments in jobs, neighborhoods, education and arts and culture in the Buffalo Niagara Region."

In its 15-year existence Artpark's award-winning "Tuesdays in the Park" concert series has surpassed other Western New York regional programs, summer events, festivals and music series in terms of quality of performances and annual growth in attendance. The 12-concert season features a diverse weekly lineup of music legends, and is presented at the scenic Artpark Amphitheater overlooking the Niagara River in historic Lewiston.

"The support of KeyBank has been instrumental to the success of our Tuesday night concerts. We truly appreciate their partnership and look forward to another wonderful season," said Dena Armstrong, chairwoman of the Artpark board of directors.

The 2017 "TIP" concerts will begin to be announced over the coming month, with tickets going on sale thereafter. The entire Artpark season will be announced in the spring. Visit this website, artpark.net and Facebook for the latest news.

The Earl W. Brydges Artpark State Park is programmed by Artpark & Company Inc., a nonprofit cultural organization, in a licensed agreement with the New York State Office of Parks, Recreation and Historic Preservation.

Headquartered in Cleveland, Key is one of the nation's largest bank-based financial services companies with assets of approximately $136.5 billion at Dec. 31, 2016. Key provides deposit, lending, cash management and investment services to individuals and small and mid-sized businesses in 15 states under the name KeyBank National Association and First Niagara Bank, National Association, through a network of more than 1,200 branches and more than 1,500 ATMs. For more information, visit https://www.key.com/.