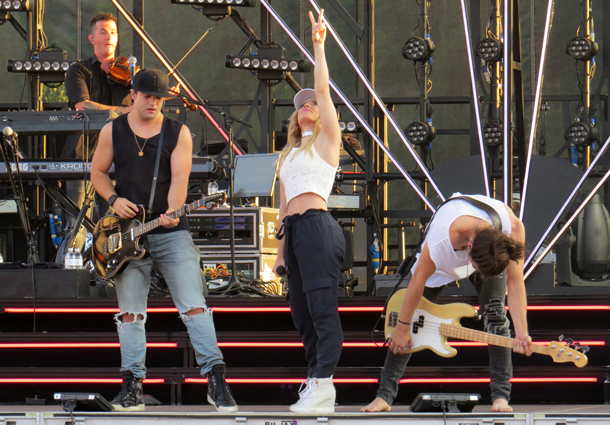 The Band Perry headlines May lineup at Fallsview

Grammy & Oscar winners come out to play at Fallsview Casino

With fiery, rock-driven beats, Grammy Award-winning country trio The Band Perry promises to perform nothing short of a musical tour de force at Fallsview Casino Resort this May. (8:30 p.m. May 4 and 9 p.m. May 5; tickets start at $70.)

Turning family harmony into big business, The Band Perry began as a solo act with lead singer Kimberly Perry and her brothers, Neil and Reid, working as her roadies. In 2005, all three officially joined forces and found themselves on the "New Faces Of Country" tour that same year - catching the attention of the recently formed Republic Nashville label. Since the release of their debut single, "Hip To My Heart," in 2010, the group has garnered international stardom with over 31 chart-topping singles in less than a decade. From "Chainsaw," "DONE.," "Don't Let Me Be Lonely" and "Postcard From Paris" to "You Lie," "All Your Life," "Better Dig Two" and "If I Die Young," The Band Perry has merged country, pop and rock elements into a sharp contemporary sound.

The Band Perry will make their debut appearance on "The Tonight Show Starring Jimmy Fallon" on Tuesday night. They will premiere "Stay In The Dark" on network television. Questlove from The Roots will join the band on drums. "The Tonight Show" airs on NBC at 11:35 p.m. ET.

The Grammy Award-winning trio released "Stay In The Dark" last week on Interscope Records. The track, produced by Benny Cassette (Kanye West, John Legend, Lily Allen), is the first from The Band Perry's first pop album - "My Bad Imagination" - due out later this year. Fans can purchase the song at iTunes andAmazon or stream it on Apple Music,Google Play and Spotify.

Also on the Fallsview roster this May is the high-flying, death-defying Broadway musical hit "Pippin." Winner of four Tony Awards, complete with unique acrobatics, magical feats and soaring songs from the composers of "Wicked," this revival is unlike anything audiences have seen. This charming tale tells the story of a young prince, Pippin, on a journey to search for passion, adventure and to find the meaning of his existence. The production is accompanied by a score from Academy Award-winning songwriter Stephen Schwartz and includes hits such as "Magic To Do," "Corner Of The Sky," "Morning Glow" and "No Time At All." (Showtime is 3 p.m. May 16, 17, 23, 24; 3 and 8:30 p.m. May 18, 25: 9 p.m. May 19, 26; 3 and 9 p.m. May 20, 27; and 3 and 7 p.m. May 21. Tickets start at $35)

"With a compilation of headliner country acts, award-winning production shows and fan-favorite comedians, Fallsview Casino's reputation for big acts is steadfast," said Cathy Price, vice president of marketing for Niagara Casinos. "From Chris Rock this February to Barenaked Ladies, Ray LaMontagne and Randy Bachman in March, plus Billy Crystal and Paul Shaffer in April, Fallsview is the place you want to be for non-stop entertainment."

Tickets to the May shows will be available starting at noon on Friday, Feb. 10, at the Fallsview Casino box office (on any show date) and all Ticketmaster outlets. Call Ticketmaster at 1-877-833-3110 or visit www.ticketmaster.ca.