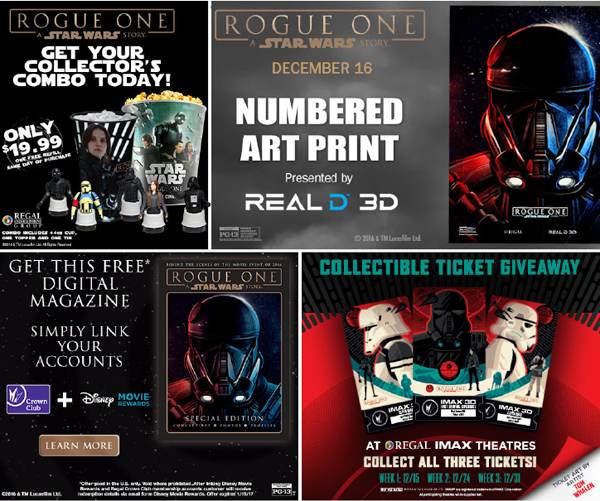 With the biggest release of the year just a few days away, Regal Cinemas across the country are gearing up to reward Crown Club members viewing "Rogue One: A Star Wars Story."

Guests seeing "Rogue One: A Star Wars Story" on Thursday, Dec. 15, will have an opportunity to purchase exclusive "Rogue One" popcorn tins, collector's cup and five different character drink toppers (while supplies last). This special offer will include one free refill on a large popcorn and large soft drink.

For additional information regarding the popcorn tins and drink toppers, as well as the select locations this offer is available, visit http://www.regmovies.com/promotions/Rogue-One-Merchandise.

Crown Club members who link their Disney Movie Rewards and Crown Club accounts will receive a digital magazine, which is a value of $9.99. This digital magazine includes a behind the scenes look at the biggest movie event of 2016, as well as concept art, photos and profiles.

The Crown Club store will have a limited number of the following "Rogue One": items number art prints, Funko Pop! figures, 3D glasses (Stormtrooper, Death Trooper and pilot), T-shirts, and one-sheets. These items will be available at www.MyRegal.com.

Enjoy "Rogue One" in Spanish with myLINGO. You'll need an iPhone and enough power to save the rebellion. Get free audio with promo code ROEB11 when you visit http://www.regmovies.com/theatres/myLingo.

myLINGO is an app that works by listening to the theater audio and playing back the full soundtrack, with the Spanish dialogue, through the headphones, perfectly synchronized with the action on screen. The audio track should be downloaded within the app before getting to the theater, and is free exclusively through the app for a limited time.

About 'Rogue One: A Star Wars Story'

From Lucasfilm comes the first of the "Star Wars" standalone films, "Rogue One: A Star Wars Story," an all-new epic adventure. In a time of conflict, a group of unlikely heroes band together on a mission to steal the plans to the Death Star, the Empire's ultimate weapon of destruction. This key event in the "Star Wars" timeline brings together ordinary people who choose to do extraordinary things, and in doing so, become part of something greater than themselves.

Regal fans are encouraged to "Like" Regal Cinemas' Facebook page and download the Regal Movies app. Moviegoers can program their favorite theater and purchase tickets all from their mobile device. The Regal app also gives patrons the ability to upload their Regal Crown Club card straight to their phone for easy access while on-the-go.

Through the industry-leading Regal Crown Club, 13-million patrons each year accumulate credits at the box office and concession stand to earn rewards such as free popcorn, soft drinks and movies.

Free membership is available at the box office or online at http://www.regmovies.com/Crown-Club.