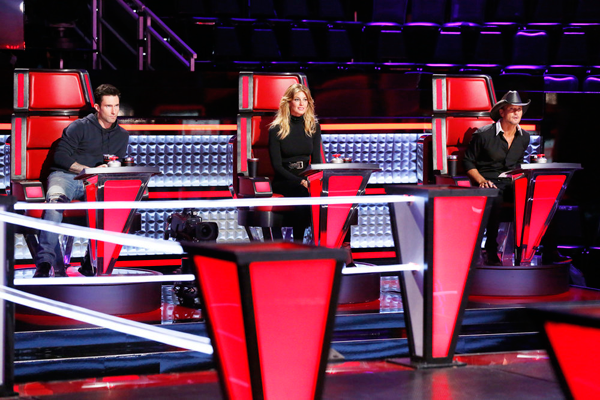 In their first visit to 'The Voice,' Hill and McGraw will prepare artists for the high-stakes 'Knockout Rounds'

For the first time ever, "The Voice" artists will have not one, but two powerhouse key advisers to help them prepare for the next phase of the show - the all-important "Knockout Rounds."

In their first visit to the show, Hill and McGraw will spend time with each of the team members and season 11 coaches Miley Cyrus, Alicia Keys, Adam Levine and Blake Shelton, advising the artists on performance strategy and offering tips as they prepare for what lies ahead.

During the "Knockouts," artists are paired against a teammate and will have to perform a song individually, while a direct competitor watches and waits. Once the performances are done, it's up to the coach to pick which artist stays on for the live shows, and which one goes home.

Hill and McGraw have numerous chart-topping songs and albums, and will bring their skills as live touring artists to the show. They recently announced they're setting out on tour next spring for the "Soul2Soul The World Tour 2017."

"I think having the perspective of performing live in many different venues, from clubs to stadiums, will help us in working with 'The Voice' artists this season," Hill said. "It's important that they be able to connect with their audience."

"I really like to dig into songs and how they need to be presented in a live environment," McGraw added. "I'm looking forward to working with the coaches to help the artists reach their potential."

In addition to multiple nominations and five Grammy Awards, Hill has won multiple Billboard Music, American Music, People's Choice and Country Music Association awards. She has consistently broken chart records with her No. 1 singles and has had major crossover success with the hits "This Kiss," "Breathe," "Cry" and "There You'll Be."

Hill has had multiple albums top both the Billboard Top 100 and country charts simultaneously, and has sold more than 30 million albums worldwide. She has had three network TV specials that garnered top ratings and has appeared and performed on every major award show, including twice on the prestigious Academy Awards. In 2000, Hill performed the National Anthem to a global audience of over 88.5 million viewers at Super Bowl XXXIV in Atlanta. She is the only country artist and one of only three artists ever to perform both "The Star Spangled Banner" and "God Bless America" at Super Bowls.

McGraw has sold more than 50 million records worldwide and dominated the singles charts with a stunning 41 No. 1 singles. He is currently riding the Billboard country airplay chart with three singles in the top 20, a feat he was the first to achieve, and now the first to achieve for a second time. He is the most played country artist since his debut in 1992, with two singles spending more than 10 weeks at No. 1 ("Live Like You Were Dying" and the genre-breaking "Over and Over"). His recent, multiweek No. 1 single "Humble and Kind," off his "Damn Country Music" album, is his 59th release to hit top 10 or better, and spawned a New York Times Best Seller book. McGraw will also be appearing in the feature film "The Shack" next year.