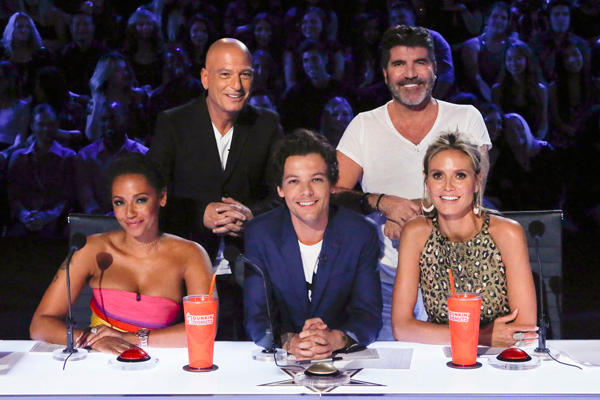 George Lopez, Reba McEntire, Ne-Yo, One Direction's Louis Tomlinson to serve as guest judges on season 11 of 'America's Got Talent'

Superstars join the judges' panel as the top 36 are decided

Internationally known celebrities George Lopez, Reba McEntire, Ne-Yo and Louis Tomlinson join the "America's Got Talent" panel for "The Judge Cuts," slated to begin Tuesday, July 12 (8 p.m. ET/PT), on NBC. This will begin the show's twice weekly airdates on Tuesdays and Wednesdays for the remainder of the season. They will join judges Howie Mandel, Mel. B., Heidi Klum and Simon Cowell.

Lopez's multi-faceted career encompasses television, film, standup comedy and late-night television. He is currently on his standup comedy tour, "The Comedy Get Down," with Charlie Murphy, Eddie Griffin, D.L. Hughley and Cedric the Entertainer in arenas across the country. Lopez is also starring in his new TV Land comedy series, "Lopez," which was renewed for a second season.  For two seasons, Lopez hosted "Lopez Tonight," a late-night television talk show on TBS. Prior to that, he co-created, wrote, produced and starred in "George Lopez," which ran for six seasons on ABC.

A multi-media entertainment mogul and mom, Reba has become a household name with a successful career that spans across music, television, film, theater and retail. As the flagship artist on Nash Icon Records, under the Big Machine Label Group umbrella, McEntire's chart-topping album "Love Somebody" scored the biggest single sales debut of her career with "Going Out Like That." She has achieved a rare pinnacle with 35 No. 1 singles and more than 56 million albums sold worldwide, along with a host of prestigious industry honors from the American Music Awards, ACM Awards, People's Choice Awards, CMA Awards and Grammy Awards. The Country Music Hall of Fame and Grand Ole Opry member has also received the Andrea Bocelli Foundation Humanitarian Award and Leadership Music Dale Franklin Award. Joining forces with superstar friends Kix Brooks and Ronnie Dunn, the trio has added more dates throughout 2016-17 to their "Reba, Brooks & Dunn: Together in Vegas" residency at the Colosseum at Caesars Palace.

Grammy Award-winning singer, composer, producer and actor Ne-Yo (born Shaffer C. Smith) is a talent sought by many artists. Not only does he have three No. 1 albums, more than 10 million albums sold worldwide and three Grammy Awards of his own, he has also written and produced chart-topping hits for today's biggest stars, including Rihanna, Beyoncé, Jennifer Hudson, Usher, Carrie Underwood and Celine Dion. Ne-Yo's latest album, "Non-Fiction," was released in 2015, anchored by the lead single "Money Can't Buy," featuring Jeezy, and "She Knows," featuring Juicy J. The album hit the R&B charts at No. 1 and reached No. 5 on the Billboard Top 200, making Ne-Yo the second male R&B artist to have six consecutive top 10 albums.

Tomlinson started his music career on "The X Factor" and, since then, the 24-year-old has grown into an international superstar alongside his One Direction bandmates. The confident entertainer auditioned for the seventh season of "The X Factor" in 2010 and advanced several rounds before being formed into a group with fellow contestants Harry Styles, Niall Horan, Liam Payne and Zayn Malik to become One Direction, a group that eventually finished the competition in third place. Following the competition, Syco signed One Direction and the band soon rocketed to stardom, and became one of the most internationally successful groups in history, earning a wealth of fans across the world and more than 169 globally renowned music awards.

The "Got Talent" format, created by Cowell and co-owned by FremantleMedia and Syco Entertainment globally, holds the Guinness World Record as the most successful reality TV format. The show can be seen in 190 markets worldwide with more than 500 million global viewers since it began airing in 2006. "Britain's Got Talent" is the U.K.'s highest rated entertainment show of the century and in 2009, discovered the global singing sensation, Susan Boyle, who has sold 19 million records to date.

Fans can visit the official show site at: http://www.nbc.com/agt