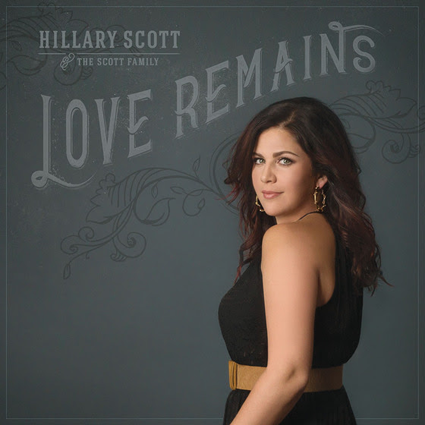 "The process of making this album has been not only creatively inspiring but I've also really been able to grow as a person," Hillary Scott said. "We've had this intense concentrated amount of time as a family together, which has been so special. With all that we've gone through together, the highs, the lows - to be able to process all of that together, to heal together, to grieve together, to laugh, to cry, all of those things. ... It's just been such a continuation of solidifying the strong foundation that we have in our family."

After the passing of her grandfather in 2011, Hillary Scott, alongside her mother, Linda Davis, her father, Lang Scott, and her younger sister, Rylee, leaned on their faith and music as a source of hope through the difficult time. The Scott family yearned to thank loved ones for their support and set out to record demos of family-favorite hymns.

As the summer of 2015 wound down and Lady Antebellum soaked-in time off the road, the family's plans for a five-song CD as a gift to family and friends blossomed into what is now "Love Remains."

The 13-track collection of faith-based songs is a combination of hymns Hillary Scott grew up singing in church, newly written originals and songs made popular by other artists. With the help of producer Ricky Skaggs, the forthcoming album blurs the lines between gospel, bluegrass, country and pop. At the center of the mix are the rich, entwined voices of the Scotts, who take turns harmonizing and singing lead.

"We didn't want to make a sad record," Lang Scott said. "You're always sad when you lose a loved one, but if you have that faith, it gives you hope. It gives you the courage to press on."

While the upcoming album's lead single "Thy Will" offers that universal message of hope, today on "Good Morning America," Hillary Scott also shared her own personal struggle that led to "baring her soul like never before" (People). She revealed the song was written about a more recent dark chapter in her life, a sudden miscarriage of her second pregnancy during the fall of 2015.

Today, fans can simultaneously watch the vibrant music video premiere for "Thy Will" on VEVO here: http://bit.ly/1UnQjal

"Love Remains" offers plenty to believe in. These are songs that find the redemption in struggle, the peace in death and the joy in bonding with family members whenever times are tough. The stories behind the songs are personal; it's music with a message, and Hillary Scott has rarely sounded more at home.

The faith-based country collection follows more than 11 million album sales worldwide for Hillary Scott as one-third of the one of the world's most popular groups, Lady Antebellum. The trio has earned six platinum singles and was dubbed ACM and CMA "Vocal Group of the Year" three years in a row. In addition to co-writing six chart-topping Lady A hits, including the six-times-platinum hit "Need You Now," Hillary Scott has also written for artists such as Blake Shelton and Sara Evans.

A former MTSU student, the university recently started a scholarship in her honor for young women seeking a career in the music industry.