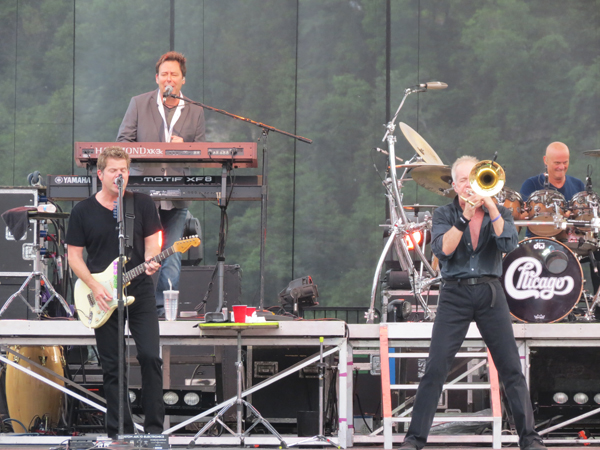 Seneca Allegany Resort & Casino will host one of the most legendary American bands in history, when Chicago performs an outdoor concert at 8 p.m. Friday, Aug. 19. Known as "the legendary rock band with horns," Chicago has left an indelible mark on popular music, with hit songs including "Does Anybody Really Know What Time It Is?," "Saturday In The Park," "Beginnings" and "25 or 6 to 4."

Starting with their landmark 1969 debut album, "Chicago Transit Authority," the band has sold more than 100 million records, achieved an amazing 25 certified platinum albums, and produced 21 top 10 singles, 11 No. 1 singles, and five consecutive No. 1 albums. Their signature sound and musicality has also garnered Chicago scores of awards and accolades across their more than 40-year career.

Music fans will be able to indulge in one of the more fun and colorful decades in recent memory, when the "I Love The '90s Tour" rolls into Niagara Falls for a heart-stomping, pulse-beating show at Seneca Niagara Resort & Casino at 8 p.m. Thursday, Sept. 29. Some of the decade's biggest stars, including Salt-N-Peppa, Vanilla Ice, Coolio and Rob Base, will light up the Seneca Events Center with the songs and style that helped bring rap, hip-hop and R&B to a new level of mainstream popularity and cultural influence in the 1990s.

These stars performing at the Seneca Niagara show recorded songs including "Ice Ice Baby," "Shoop," "Gangsta's Paradise" and "It Takes Two," which all became radio staples - and were blasted from countless car stereos, college dorm rooms and headsets nationwide.

After the summer air begins to cool in October, the entertainment stays hot when John Mellencamp performs at Seneca Niagara Resort & Casino at 8 p.m. Saturday, Oct. 22. The show is part of the final leg of Mellancamp's "Plain Spoken Tour," which has been called "a triumphant, career-spanning show" by Hollywood Reporter, and a "superb performance ... still full of fiery defiance" by the Boston Globe.

Throughout his 35-year-plus career, Mellencamp has transitioned from pop star to one of the most highly regarded songwriters of his generation. From early hits such as "Jack and Diane" and "Hurt So Good," to heartland-inspired songs "Rain On The Scarecrow" and his most recent album release, "Plain Spoken," Mellencamp has firmly established his place in rock music history.

Tickets for all shows announced today go on sale at noon Friday, May 20, and are available at select Seneca Resort & Casino retail outlets, online at SenecaCasinos.com and Ticketmaster.com, all Ticketmaster locations or by phone at 800-745-3000.