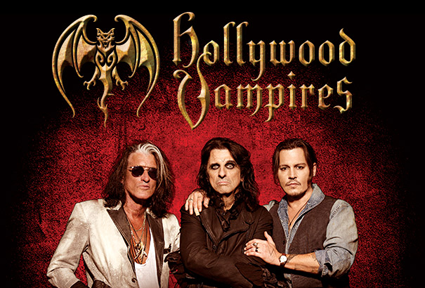 Judging by the first round of summer concerts announced by Seneca Resorts & Casinos today, one thing is certain: Summer 2016 is going to be hot. Fans can see some of the biggest names and brightest stars in what is shaping up to be a sizzling summer concert season, including outdoor shows and concerts inside the Seneca Niagara and Seneca Allegany Events Centers and the intimate Bear's Den Showroom.

After their worldwide television debut on the 58th Annual Grammy Awards earlier this year, The Hollywood Vampires with Alice Cooper, Johnny Depp and Joe Perry, will stop at Seneca Niagara Resort & Casino on Saturday, July 9, for a special outdoor show starting at 8 p.m. A super-group comprised of rock royalty and a Hollywood superstar, the Vampires will hit the outdoor stage at Seneca Niagara offering fans a nonstop, energetic rock concert like no other, performing their new single, "Bad As I Am," from their new deluxe album, as well as renditions of popular classics including "My Generation," "Whole Lotta Love" and a "School's Out"/"Another Brick in the Wall" medley.

On July 16, a pair of rock legends team up for an amazing night of music when Michael McDonald and America perform at Seneca Allegany Resort & Casino. Between them, the superstars have won six Grammy Awards and are responsible for an incredible collection of hit songs. Some of their best known hits include "A Horse With No Name," "Ventura Highway," "Tin Man," "What A Fool Believes," "Minute By Minute," "I Keep Forgettin' " and "Sweet Freedom."

Tickets to enjoy this evening inside the Seneca Allegany Events Center start at $55.

The outdoor excitement heats up again at Seneca Niagara Resort & Casino when Counting Crows & Rob Thomas team up for a night of summer fun on Saturday, Aug. 13. Counting Crows raced to popularity and commercial success with their 1993 debut album, "August and Everything After," and the band has been an enduring part of the popular music scene in the 23 years since. Some of their most recognizable songs include "Mr. Jones," "Round Here," "A Long December" and "Accidentally In Love." Thomas is one of modern music's most commercially successful artists, delivering hit songs as both a solo artist and as the frontman for Matchbox Twenty. His hits include "Lonely No More," "This Is How A Heart Breaks," "3AM" and "If You're Gone."

Tickets for the Seneca Niagara show start at $35.

Saturday, Sept. 3, will be a night that many music fans have been eagerly awaiting. That's the night when Culture Club takes the stage inside the Seneca Niagara Events Center for an 8 p.m. performance. Known for dominating the charts worldwide with their classic hits including "Karma Chameleon," "Do You Really Want To Hurt Me" and "Miss Me Blind," the iconic band is heading to Seneca Niagara as part of its 40-city tour throughout the U.S., Canada, Mexico, Australia and Asia. It is the band's first full tour in more than 12 years. Culture Club has set many records, including being the first band since the Beatles to have three top 10 hits in America from a debut album. In the 1980s, the band dominated the charts in more than a dozen countries, with multiplatinum albums and more than 50 million albums sold worldwide to date.

Tickets for all shows go on sale at noon Friday, April 22, and are available at select Seneca Resort & Casino retail outlets, online at SenecaCasinos.com and Ticketmaster.com, all Ticketmaster locations or by phone at 800-745-3000.