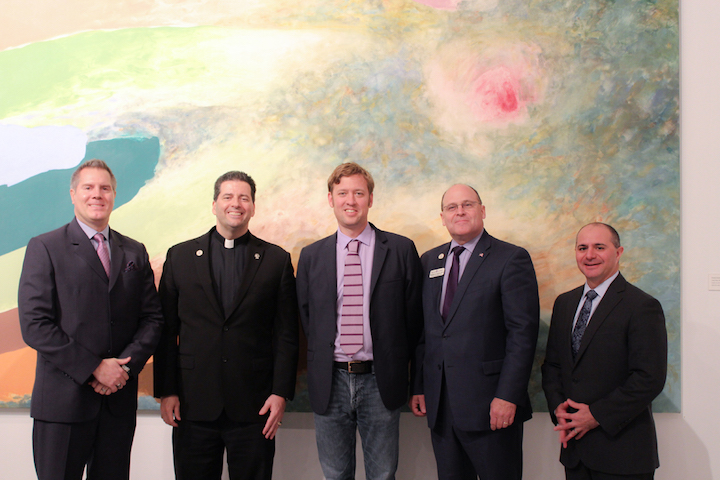 Smart technology presents a major opportunity to bolster economic development in Western New York, according to a prolific urbanist and technology expert who spoke at Niagara University on Nov. 19.

Dr. Anthony Townsend, the author of "SMART CITIES: Big Data, Civic Hackers, and the Quest for A New Utopia," offered the idea during the first of what is set to become an annual lecture series at NU that is sponsored by the Maid of the Mist.

The public event was hosted by NU's College of Hospitality and Tourism Management.

During Townsend's 45-minute presentation, he explained how technology is being leveraged by several forward-thinking cities - San Francisco, Chattanooga and Philadelphia, to name a few - to complement and, in some instances, revitalize stagnant tourism industries.

Niagara Falls, home to one of the world's most popular tourist attractions, has seen hotel occupancy rates continuously increase in recent years. However, as Townsend noted, even tourist-friendly regions that embrace "untethered" technology, social media sentiment analysis and open data will be well positioned for sustained growth in the tourism and hospitality industries, as well as in cluster development.

•Providing unified mobile connectivity for tourists throughout the region. Make this a distinctive platform for ongoing engagement.

•Placing less emphasis on creating new data collections and more on enabling others to use points-of-interest data.

•Focusing on research, innovation and training for small business applications.

•Doing something bold to support the sharing economy in the name of tourism.

"One of the most interesting things that progressive tourist cities are using is the things that people are saying on social media to understand how people experience an area, and how they feel about it when they visit," Townsend said. "Make it easy for people to get online and use the data they're providing to analyze what people are doing."

Townsend is an internationally recognized expert on urbanization, ubiquitous computing, technology innovation and economic development. He holds posts at the Data & Society Research Institute and New York University's Rudin Center for Transportation. He is an adviser to government and industry, currently works with Google's Sidewalk Labs, the World Economic Forum, Code for America and Urban.Us on technology strategy for cities.

"Niagara County employs over 14,000 people in tourism, making it the second-largest industry in the county," Christopher Glynn stated. "We're on an upward trajectory here in Niagara, yet I'm sure that we haven't completely reached our fullest potential in terms of tapping into the tourist dollars that are coming into the area. There's a lot of work to be done outside of the park to get visitation spread out throughout the county and throughout Western New York."

"We are grateful to the Glynn family for their longtime support of Niagara University and this new event, which will facilitate important conversations on tourism in the region," Maher said. "This is another concrete illustration that Niagara University fully intends to be involved in the planned development and growth of the tourism and hospitality industry in Western New York and New York state."