Hochul calls Buffalo's economic growth a model for other cities

Lt. Gov. Kathy Hochul cited Buffalo's remarkable economic resurgence as a model for how to transform a city into a vibrant, growing urban area as part of her discussion at the Daemen College Distinguished Leaders Lecture Series event held May 29.

"After facing decades of challenges and neglect, we pulled together and turned Buffalo around to create a city that is prospering and continues to develop," said Hochul, who was the first top official from the governor's office to be a featured speaker in the lecture series. "A range of economic development efforts has had a powerful impact that's generated a new level of excitement and a positive outlook for Buffalo's future."

Hochul pointed to Gov. Andrew M. Cuomo's "Buffalo Billion" economic development initiative as the turning point for the Buffalo Niagara region. "The substantial commitment of $1 billion in the Buffalo-area economy is literally reshaping Western New York by spurring business development, job growth and, likely one of the most visible signs of progress, a complete revitalization of the waterfront," she said. 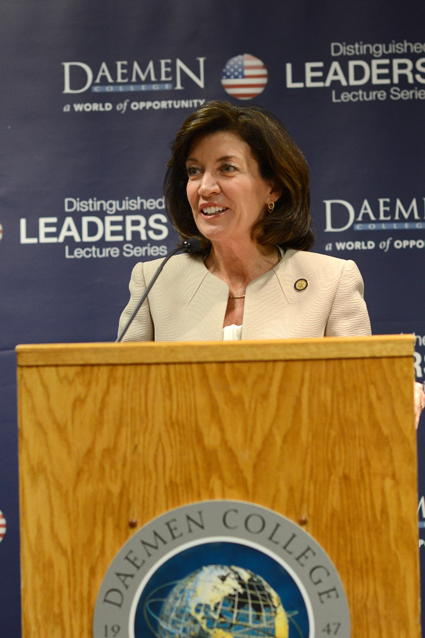 In one "Buffalo Billion" initiative, Daemen's recently completed $2 million, state-of-the-art visual effects facility signified a major step forward to grow Buffalo Niagara's film and post-production industry. The facility evolved from a collaboration between Daemen and Empire Visual Effects, a post-production and animation company. A $4.5 million "Buffalo Billion" grant jump-started the endeavor, which included $1.9 million to Daemen to create and equip the high-tech facility.

"This kind of collaboration is vital to linking higher education with stimulating the region's economy," Hochul said.

To help drive local initiatives, the Western New York Regional Economic Development Council, which is made of key area stakeholders from the public and private sector, has been instrumental in moving the region's efforts forward.

"The REDC is an opportunity for the Buffalo Niagara region to be in charge of its own future and to advance the area's many assets through a strategic planning approach. This type of regional oversight has changed the way the economic development process and projects are organized," Hochul said.

In other efforts, Hochul discussed the success of Start-Up NY, with Western New York home to approximately 40 percent of new businesses so far created from the initiative; 43North, the world's largest business idea competition and its efforts to encourage business start-ups in the region; SolarCity's project that's currently underway to build an expanded solar panel manufacturing plant in Buffalo that will be one of the biggest in the world and bring more than 1,400 jobs to the area; and the Buffalo Niagara Medical Campus, a consortium of the region's premier health care, life sciences research and medical education institutions.

Also, tapping the region's rich history in manufacturing, Buffalo Manufacturing Works has been created to support the growth of the region's manufacturing sector. A state-of-the-art manufacturing facility has space for research, testing and training, a project Hochul described as focusing on "one of Western New York's long-standing strengths with a dedicated workforce that possesses a tremendous work ethic."

Perhaps one of the most impactful signs of Buffalo's economic renaissance, Hochul said, is the increasing number of young residents living and working in the city. "Following a period when a significant number of young professionals were leaving the region, it's inspiring to know they've rediscovered Buffalo and all it has to offer. They are getting an exciting urban experience in an area that's growing and building."