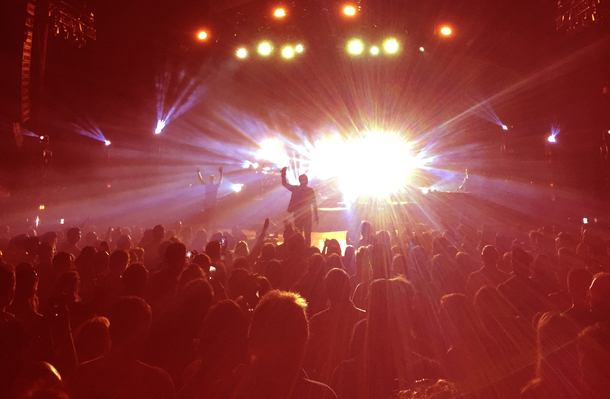 Hitting 36 cities and selling out venues in Chicago, Seattle, Phoenix, Dallas and more, the tour saw an overwhelming response. But fans did more than just show up - they gave more than $700,000 to CURE International, an organization with which Tomlin partnered for the "Love Ran Red Tour." The donations will help fund 700 life-changing surgeries for children with disabilities.

Last fall, Chris and his wife, Lauren, joined the board of directors for CURE International, the largest provider of reconstructive surgery to disabled children in the emerging world.

"They're really changing kids' lives," Tomlin said of the organization. "I've found this is a place where I can trust where the money is going, and it's really going to heal these kids."

To learn more about Tomlin's involvement with CURE, visit cure.org/tomlin.

Tomlin recently announced "Worship Night in America," which will bring people across the country together for a time of worship and prayer for the nation. Events will take place Aug. 8 in New York City's Madison Square Garden, Aug. 13 in Denver's Red Rocks Amphitheater and Aug. 15 in Sacramento's Sleep Train Arena.

Following "Worship Night In America" events, Tomlin will continue with a fall leg of the "Love Ran Red Tour" this October, with Rend Collective joining as the opening act.

With 10 albums, 13 No. 1 radio singles, a Grammy Award (and eight additional nominations), three Billboard Music Awards, 21 Dove Awards, a Platinum and four Gold albums to his credit, Tomlin is among the most well-known and influential artists in contemporary Christian music.

Referred to by TIME Magazine as "most likely the most often sung artist anywhere," Tomlin also has 15 of the top 100 CCLI songs, with four of them being in the top 10.

BMI and GMA Dove Awards' 2014 Songwriter of the Year, Tomlin's "How Great Is Our God" was his first No. 1 on the CCLI Top 25, moving to No. 1 after becoming one of the fasting rising modern-day hymns in CCLI chart history. In addition to having sold more than 7 million albums and over 8.9 million digital tracks, Tomlin made history as his single "Jesus Messiah" ("Hello Love") garnered 97 adds at radio its first week and skyrocketed to No. 1, making it the biggest-ever add date in Christian radio history.

In the midst of his record-breaking success, and continuing his role as worship leader at Passion City Church in Atlanta, Tomlin continues touring and leading at Passion Conference gatherings across the U.S. and worldwide.

"Burning Lights" debuted at No. 1 atop the Billboard 200 in January 2013, making history as only the fourth Christian music album to do so. Tomlin's 10th recording, "Love Ran Red," is available now.

[Get Connected with Chris Tomlin]