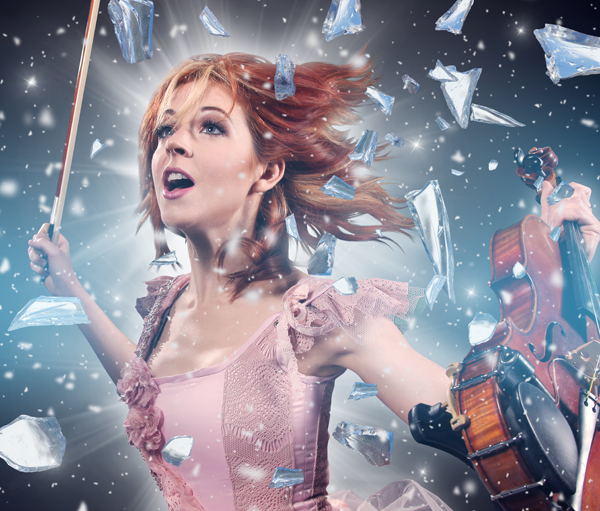 Tickets are $12 for advance general admission/$17 week of show (Sunday through Wednesday); $27 for pit (front-of-stage standing-room-only); and $27 for reserved seating (adjacent to soundboard; approximately 100 feet from the stage). Prices include a facility fee; additional fees apply for online and phone orders. Tickets will go on sale March 28 at 10am. Fan club pre sale begins March 17.

Stirling is one of the biggest artist development breakthrough stories in recent years. A classically trained violinist from Gilbert, Arizona, she has entered a futurist world of electronic big beats and animation, leaping through the music industry with over half a billion views on YouTube, Billboard chart-topping hits and sold-out tours worldwide.

Stirling's self-titled debut album featured 12 original tracks, including the viral smash "Crystallize," which has racked up over 111million YouTube views. The album has sold more than 474,000 copies in the U.S. without the backing of a major label, and has gone platinum in Germany and gold in Poland and Switzerland. The album reached No. 1 on the Billboard Dance/Electronic Chart and the Billboard Classical Album Chart, and also peaked at No. 22 on the Billboard Top 200.

On April 29, Stirling released her new album, "Shatter Me." It debuted at No. 2 on the Billboard Top 200 album chart. The disc features 12 new songs written by Stirling and includes collaborations with singer Lzzy Hale from the Grammy-winning band Halestorm and "The Voice" finalist Dia Frampton of Meg & Dia.

"I really dug deep and poured my heart into 'Shatter Me,' " Stirling said. "Everything from the artwork to the music shares a cohesive message that I hope will inspire others to push their own boundaries."

It is hard to believe judge Piers Morgan told Stirling the world had no place for a dancing dubstep violinist. But being voted off 2010's "America's Got Talent" at the quarterfinals turned out to be the best thing that's ever happened to her. Rejection simply strengthened Stirling's resolve to be herself.

"The same reasons I was told I wouldn't succeed are the reasons people travel hundreds of miles to see me now," she said, laughing. "Because it's different. Because it's something you haven't seen before."

Since the show, Stirling has flourished as an artist.

Raised in a Mormon community in Arizona, Stirling studied classical music rigorously as a teenager. Her love for the violin would not let go, and it became a comfort throughout her struggle with an eating disorder during her early adulthood.

Through this passion, Stirling has created a new music world where the romance of Celtic folk music and modern classical meet the infectious energy of dance and electronica.

On stage, Stirling moves with the grace of a ballerina, but works the crowd into a frenzy "dropping the beat" like a rave fairy.

Stirling is the model of a modern independent recording artist, with a symbiotic relationship with her fans. She is famed for taking "requests" and has recorded unique versions of the themes from "Phantom Of The Opera" and "Game Of Thrones," as well as computer games "Zelda," "Pokémon" and "Skyrim," and pop songs by Michael Jackson and Rihanna. She uploads them all to Lindseystomp, a secondary YouTube channel packed with music videos and short comedy films.

A motivational speaker in her spare time, Stirling uses her own story to show teenagers they've got to have confidence in the very things that make them unique - then wait for the world to catch up.