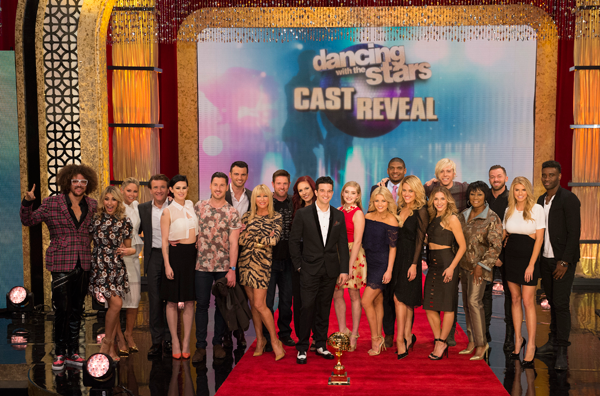 The "Dancing with the Stars" cast. The series returns Monday, March 16, on WKBW. Click for a larger image. (ABC photo by Todd Wawrychuk)

The 10th anniversary celebrity cast of "Dancing with the Stars" is strapping on its ballroom shoes and getting ready for the first dance Monday, March 16 (8-10:01 p.m., ET) on the ABC Television Network. This 20th season's lineup of celebrity dancers includes a television icon, a party rocker, a football star and a Shark, to name a few.

The reigning Mirrorball champion, Witney Carson, will be partnered with a surprise celebrity to be announced at a later date, completing the cast of 12 celebrity dance couples.

UPDATE: It was announced on the March 10 "Good Morning America" that Carson would partner with "The Bachelor" star Chris Soules, thus completing the cast of 12 celebrity dance couples.

As announced this morning on ABC's "Good Morning America," the celebrities and their professional partners heading to the ballroom this season (in alphabetical order) are:

NOAH GALLOWAY - A native of Birmingham, Alabama, Sgt. Galloway was assigned to the 1st of the 502nd Infantry of the 101st Airborne Division out of Fort Campbell, Kentucky, during Operation Iraqi Freedom. Just three months into his second tour of duty, he experienced a life-changing injury. On Dec. 19, 2005, Galloway lost his left arm above the elbow and left leg above the knee in an improvised explosive device attack. He was transported to Germany to receive medical treatment, remaining unconscious for five days. Galloway woke up late in the evening Christmas Eve to learn he lost two of his limbs and sustained severe injuries to his right leg and his jaw. Galloway was then transferred to Walter Reed Army Medical Center in Washington, D.C.

After a long stint in recovery and rehabilitation, Galloway did what many disabled veterans do, becoming withdrawn, out of shape and depressed. The former fitness fanatic and hypercompetitive athlete was now drinking, smoking and sleeping his days away. But late one night, Galloway took a long look in the mirror and realized there was more to him than the injuries. So he set a goal to get back in shape, be healthier and inspire others.

Now a personal trainer and motivational speaker, the father of three doesn't take excuses from his clients, fans and followers. He continues to compete and participate in adventure races around the country. A sought-after public speaker, Galloway travels the country sharing his story, encouraging and motivating others to offer no excuses. Most recently, Galloway appeared on the November cover of Men's Health Magazine, as he was named the publication's 2014 Ultimate Guy.

Noah is partnered with Sharna Burgess.

ROBERT HERJAVEC - Herjavec is recognized as the "nice" Shark on ABC's Emmy Award-winning show "Shark Tank." Born in Croatia, he and his family fled communism in the former Yugoslavia with just one suitcase and $20 to their name. Today, he helps launch the entrepreneurial dreams of millions of Americans and is recognized as one of the world's leading cybersecurity experts. As founder and CEO of Herjavec Group, he has grown his cybersecurity business over 12 years from $400,000 in sales and three employees to $140 million in sales and 250 employees worldwide.

Robert is partnered with Kym Johnson.

PATTI LABELLE - Through the years, this songbird's name has become synonymous with grace, style and class. Her effortless ability to belt out classic rhythm and blues renditions, pop standards and spiritual sonnets has created the unique platform of versatility that the artist is known and revered for. For more than 50 years, LaBelle's strong and soulful voice has left an indelible mark all over the world. This Philadelphia-born entertainer captured her first hit in 1962, as lead singer of The BlueBelles and went on to receive worldwide acclaim with the trailblazing and genre-bending trio Labelle. A solo artist since the 1970s, she has created timeless songs that have helped cement her place as a music icon and garnered her numerous honors, including Grammys and American Music Awards. Patti is partnered with Artem Chigvintsev.

NASTIA LIUKIN - Grace and beauty in the sport of gymnastics led Liukin to her crowning achievement as Olympic all-around gold medalist at the 2008 Olympic Games in Beijing. But winning five medals was only the beginning for this golden girl. After returning home, she graced the pages of countless magazines and appeared on various TV shows, while even being chosen as one of 2009's most influential people. Liukin's commitment to helping young girls with big dreams landed her a clothing line, SuperGirl by Nastia, along with her very own gymnastics competition, The Nastia Liukin Cup. She was a member of the creative team and a cast member for the Kellogg's Tour of Olympic Champions, a national, 40-city tour that followed the 2012 Olympic Games. She remains active in the Olympic world as the Athlete Ambassador for the USOC's Road to Rio tour, along with work as a the female television commentator at USA Gymnastics Nationals, Olympic Trials and the Olympic Games in Rio 2016 for NBC. Liukin is partnered with Derek Hough.

RIKER LYNCH - Lynch is an actor/musician/songwriter originally from Littleton, Colorado, has been singing and performing since the age of 3. He was originally cast in Hollywood as Jeff Sterling, one of the members of the Warblers, the a-cappella group featured in "Glee." Lynch is currently a singer and bassist in the Hollywood Records recording act R5, along with his siblings Rydel, Rocky and Ross Lynch (who plays Austin on Disney's "Austin & Ally"), and best friend, Ellington Ratliff. Lynch will be partnered with Allison Holker.

CHARLOTTE MCKINNEY - 21-year-old model and actress McKinney is the centerpiece of the highly buzzed about Carl's Jr. Super Bowl ad. She previously fronted a campaign for the iconic brand, Guess. McKinney began modeling full-time at the age of 17. In addition to modeling, she continues to build her acting career across television and film. This summer, she can be seen in "Joe Dirt 2: Beautiful Loser," co-starring Christopher Walken and David Spade. Having spoken publicly about personal experiences with bullying, she continues to be vocal about the long-term effects it has on its victims. McKinney will be partnered with Keo Motsepe.

REDFOO - The man beneath the famous fro is more than just a charismatic character on the airwaves, he is a formidable entertainment force: performer, producer, actor, host, judge, innovator and fashionista. Bursting onto the world stage as one half of LMFAO, and scoring a string of No. 1's in more than 30 countries, his sound reflected a new movement in music, catapulting him into high demand amongst his musical alumni, collaborating with the likes of Kanye West, Pitbull, will.i.am, fellow DJ's David Guetta and Steve Aoki, and performing alongside Madonna in the 2012 Super Bowl halftime show. Redfoo is the first ever "DWTS" guest judge to appear as a contestant on the show. He is partnered with Emma Slater.

MICHAEL SAM - Sam was raised in Hitchcock, Texas, and attended the University of Missouri on a football scholarship. He made history last year when the star college football player came out as gay ahead of the NFL draft, making him the first openly LGBT player to be drafted in any major American sport. As a college player at the University of Missouri, Sam was named a first-team All-American and Co-SEC Defensive Player of the Year. He is partnered with Peta Murgatroyd.

WILLOW SHIELDS - Shields is most notably recognized for her role as Primrose Everdeen in the "The Hunger Games" franchise. The New Mexico native began acting at the age of 7 when she followed her brother to an audition and booked a role in USA Network's "In Plain Sight." She was in the Hallmark Hall of Fame movie "Beyond the Blackboard," as well as R.L. Stine's "The Haunting Hour." However, it was her break-out role as Prim, the sensitive but strong younger sister to Katniss Everdeen (Jennifer Lawrence) in the worldwide phenomenon "The Hunger Games" that bought her instantaneous international fame. Shields is partnered with Mark Ballas.

SUZANNE SOMERS - A trusted health advocate, successful entrepreneur and star of two hit TV series, Somers has written 25 books, including 13 New York Times bestsellers, five of which were No. 1. Her last book, "I'm Too Young for This!: The Natural Hormone Solution to Enjoy Menopause," was an instant New York Times bestseller. Her new book, "TOX-SICK: From Toxic to Not Sick," will be published by Harmony in April. Somers is partnered with Tony Dovolani.

RUMER WILLIS - Willis began her acting career as a child starring with her mother, Demi Moore, in the major motion pictures "Striptease" and "Now and Then." She said she is thrilled to be continuing her For the Record journey playing the Basket Case in "Dear John Hughes." Most recently, she wowed L.A. audiences as Fran in the Baz Luhrmann production at "DBA," having portrayed Juliet in its prior incarnation at Rockwell Table and Stage. Willis is currently recording her debut album under the guidance of legendary music icon Linda Perry. She is partnered with Valentin Chmerkovskiy.

This season of "Dancing with the Stars" will be filled with surprises as the show celebrates the past 10 years. "DWTS" will bring back fan favorite themes, including Disney and Latin night, and also introduce new themes, including "Spring Break Night."