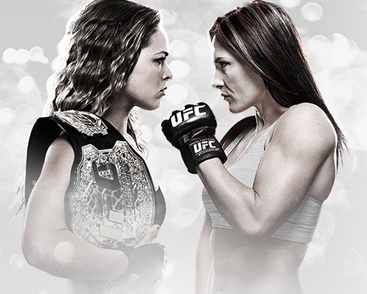 The UFC returns to Los Angeles with the biggest fight in women's MMA as Fathom Events and the UFC bring UFC 184: Rousey vs. Zingano to movie theaters nationwide at 10 p.m. Feb. 28, broadcast live from the Staples Center.

The time is now for two of the sport's best to collide as fight fans are set to witness a hard-hitting five-round women's bantamweight title showdown as "Rowdy" Ronda Rousey (10-0) looks to remain the only undefeated champion in women's bantamweight history when she squares off against No. 1 contender "Alpha" Cat Zingano (9-0).

Tickets to watch UFC 184: Rousey vs. Zingano on the big screen are available at participating theater box offices and at www.FathomEvents.com. The event will be presented in more than 300 select movie theaters around the country through Fathom's Digital Broadcast Network. Locally, the UFC card will be shown here:

For a complete list of theater locations, visit the Fathom Events website (theaters and participants are subject to change).

Other bouts for UFC 184 include:

•"The Filipino Wrecking Machine" Mark Munoz (13-5, fighting out of Lake Forest, California) is set to battle Roan "Jucao" Carneiro (19-9, fighting out of Rio De Janeiro, Brazil) in a middleweight bout.

•Masio Fullen (9-4, fighting out of Guadalajara, Mexico) will take on Alex "Rolo" Torres (2-1 of Bogotá, Colombia) in a featherweight bout.

The full fight card is available at http://www.ufc.com/event/UFC184#/fight.

"Following the success and excitement of UFC 183, we are thrilled to partner with UFC to bring another night of nonstop live action to movie theaters across the nation," Fathom Events Vice President of Programming Kymberli Frueh-Owens said. "Boasting several of the sport's top athletes, UFC 184 is sure to be a star-studded showdown on the big screen."

All bouts are live and subject to change.