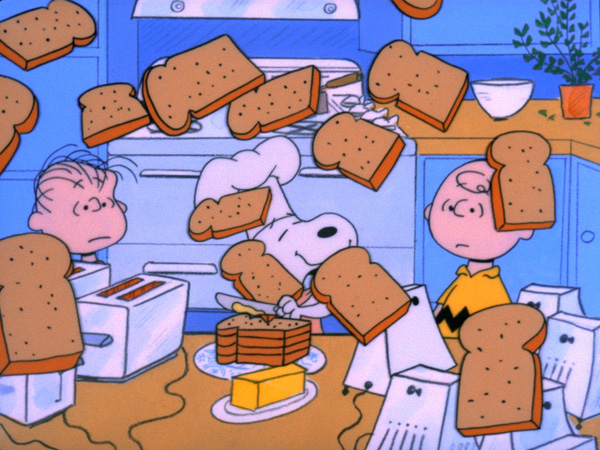 'Tis the season for holiday programming on ABC

ABC celebrates the joy of the holidays, including the world premiere of Pixar Animation Studios' "Toy Story That Time Forgot," the return of the competition series "The Great Christmas Light Fight," special musical performances on "CMA Country Christmas," and classic, animated Christmas specials from Walt Disney Animation Studios, "Peanuts," DreamWorks Animation and Dr. Seuss, among others.

A special bonus cartoon from Schulz, "This Is America, Charlie Brown: The Mayflower Voyagers," will air with the "Peanuts" classic, in which history comes to animated screen life in a captivating and informative program about the Mayflower voyagers. (8-9 p.m.)

"Disney Prep & Landing" - Walt Disney Animation Studios presents a half-hour holiday special tale of an elite unit of elves known as Prep & Landing. After working tirelessly on Prep & Landing for 227 years, an elf named Wayne is upset when he doesn't receive an expected promotion to be the Director of Naughty List Intelligence. Instead, Magee, the North Pole Christmas Eve Command Center Coordinator (NPCECCC for short), partners Wayne with Lanny, an idealistic rookie who has an undying enthusiasm for Christmas. During their Christmas Eve mission, Wayne and Lanny encounter unexpected challenges that push them to their limits.

Will the elves be able to guide Dasher, Dancer and the rest of the reindeer pulling Santa's sleigh through a raging snowstorm to ensure a Merry Christmas for all? Find out. (8 p.m.)

"Prep & Landing 2: Naughty vs. Nice" - The yuletide adventures of Christmas elves Lanny and Wayne continue. With the "Big 2-5" fast approaching, Wayne and Lanny must race to recover classified North Pole technology that has fallen into the hands of a computer-hacking Naughty Kid. Desperate to prevent Christmas from descending into chaos, Wayne seeks out the foremost Naughty Kid expert to aid in the mission, a bombastic member of the Coal Elf Brigade who also happens to be his estranged brother, Noel. (8:30 p.m.)

"CMA Country Christmas" - Some of the biggest names in music will come together to celebrate the holidays on "CMA Country Christmas," a two-hour special hosted for the fifth year by Jennifer Nettles. The event is a celebration of the season featuring some of the top stars in music performing holiday songs and getting into the Christmas spirit. Artists already announced include Dan + Shay, Brett Eldredge, Sara Evans, Lucy Hale, Hunter Hayes, Little Big Town, Idina Menzel, Jennifer Nettles, LeAnn Rimes, Michael W. Smith and Carrie Underwood. (8 p.m.)

"A Charlie Brown Christmas" - Celebrate the joy of the holidays with the classic animated Christmas-themed "Peanuts" special, "A Charlie Brown Christmas," created by Charles M. Schulz. In the digitally re-mastered 1965 special, Charlie Brown complains about the overwhelming materialism that he sees everywhere during the Christmas season. Lucy suggests he become director of the school Christmas pageant and Charlie Brown accepts, but it proves to be a frustrating struggle. When an attempt to restore the proper spirit with a forlorn little fir Christmas tree fails, Charlie Brown needs Linus' help to learn what the real meaning of Christmas is. (8:30 p.m.)

"The Great Christmas Light Fight" - season premiere - It's the most wonderful time of the year when ABC's hit decorating competition series returns for a second season. Each of the six one-hour episodes features four families from across America who work harder than Santa's elves in order to out-deck the halls of their competition and possibly win the ultimate Christmas gift: $50,000. The total prizing for the series is $300,000. Michael Moloney and Sabrina Soto of "Extreme Makeover: Home Edition" return as judges for the series. (8 and 9 p.m.)

"Santa Claus Is Comin' To Town" - In the perennial favorite created in 1970 by Rankin-Bass Productions ("Rudolph the Red-Nosed Reindeer," "Frosty the Snowman,"), Fred Astaire narrates this timeless tale of Kris Kringle (Mickey Rooney), a young boy with an immense desire to do good things for others. The vocal cast features Rooney as Kris Kringle; Keenan Wynn as Winter; Paul Frees as Burgermeister Meisterburger, Grimsby, the soldiers and the townsmen; Joan Gardner as Tanta Kringle; Robie Lester as Jessica and Andrea Sacino; and Dina Lynn, Gary White and Greg Thomas as the children. (8 p.m.)

"America's Funniest Home Videos Christmas Spectacular" -- This holiday season, "America's Funniest Home Videos" celebrates from the Disneyland Resort in California, with host Tom Bergeron highlighting the best classic Christmas videos in "AFHV" history, along with all-new clips. The episode includes: videos featuring the hazards of decorating, as lights, mantels, trees and people all go down; videos of kids reacting to lousy gifts, or causing mayhem during recitals, or the hilarious things they say while sitting on Santa's lap; and videos of cats and dogs getting in on the Christmas mischief as they investigate gifts and decorations. (9 p.m.)

"I Want A Dog for Christmas, Charlie Brown!" - "I Want a Dog for Christmas, Charlie Brown!" centers on ReRun, the lovable but ever-skeptical younger brother of Linus and Lucy. It's Christmas vacation and, as usual, ReRun's big sister is stressing him out, so he decides to turn to his best friend, Snoopy, for amusement and holiday cheer. However, his faithful but unpredictable beagle companion has plans of his own, giving ReRun reason to ask Snoopy to invite his canine brother, Spike, for a visit. (8 p.m.)

"Shrek the Halls" - DreamWorks Animation's "Shrek the Halls," a half-hour of entertainment starring America's favorite ogre and his friends, featuring the voices of Mike Myers, Eddie Murphy, Cameron Diaz and Antonio Banderas. Just when Shrek thought he could finally sit back, relax and enjoy his happily ever after with his new family, the most joyous of all holidays arrives. It's Christmas Eve and everyone is filled with holiday cheer - except for Shrek. He isn't exactly the picture of yuletide joy, but for the sake of Fiona and the kids, he tries to get into the spirit of things as only an ogre can. Unfortunately, everyone seems to have their own ideas about what Christmas is all about, so when Donkey, Puss In Boots, Gingerbread Man and the whole gang try to join in on the fun, Shrek's plans for a cozy family celebration end up spiraling into one truly unforgettable Christmas. (8 p.m.)

"Disney Parks Frozen Christmas Celebration" - Music, magic and merriment come together when Disneyland Resort in California and Walt Disney World Resort in Florida present the 31st annual Christmas Day parade and TV special. The star-studded sounds of the season include some of today's top musical talents lending their voices to celebrate the holidays. And, from fairy tales to classic Christmas carols, Disney friends and holiday characters spread joy and good tidings through Disneyland Park in California and the Magic Kingdom Park in Florida. This year promises some extra "Frozen" fun with fanciful floats and colorful cavalcades as Santa Claus and his reindeer wend their holly, jolly way down Main Street, USA. (10 a.m.)

"How the Grinch Stole Christmas Special" - Based on the classic children's book by the legendary Dr. Seuss, this special takes viewers inside a snowflake to Whoville, the magical land of the Whos. But high above this holiday-loving town resides the Grinch, a hateful creature with a heart three sizes too small, who despises Christmas and plots to steal it from the Whos. (8 p.m.)

"Dr. Seuss' How the Grinch Stole Christmas" - Based on the classic children's book by Dr. Seuss, the live action "Dr. Seuss' How the Grinch Stole Christmas" takes viewers inside a snowflake to Whoville, the magical land of the Whos. But high above this holiday-loving town resides the Grinch (Jim Carrey), a nasty creature with a heart three sizes too small, who hates Christmas and plots to steal it from the Whos. Will a greedy Mayor Augustus Maywho (Jeffrey Tambor) or the seductive Martha May Whovier (Christine Baranski) foil his plans? Or will it be the loving little Cindy Lous Who (Taylor Momsen) who will teach him the true meaning of Christmas? (8:30 p.m.)

In "Happy New Year, Charlie Brown," the "Peanuts" gang is ringing in 1986 and Marcie and Peppermint Patty are throwing a big New Year's Eve bash. Charlie Brown plans to celebrate the holiday by curling up with a big book that weighs nearly as much as he does, Tolstoy's "War and Peace." The book's weight doesn't stop him from lugging it to Lucy's pre-party dance class, where he cuts a mean rug with a rollicking Patty. With just 1,131 pages to go, Charlie Brown takes another break, this time for the party, and summons the courage to invite his true love, the little red-haired girl.

In "She's a Good Skate, Charlie Brown," disaster strikes as Peppermint Patty heads to her first major ice-skating competition with coach Snoopy and faithful companion Marcie by her side. As always, the unassuming Woodstock flies in to save the day. (8 p.m.)

"Dick Clark's Primetime New Year's Rockin' Eve with Ryan Seacrest 2015" - Before the ball drops on New Year's Eve, global music sensation Taylor Swift will culminate another record-breaking year with a performance of her hit songs for more than 1 million fans in Times Square live on ABC's telecast. Swift will join a stellar lineup of the year's top music artists in celebrating during the biggest live music celebration in show history with almost 40 performances and six hours of music. The bicoastal celebration will include hours of special performances and reports on New Year's celebrations from around the globe. Seacrest will lead the traditional countdown to midnight from Times Square in New York City as he has for the past nine years. (8 p.m.)