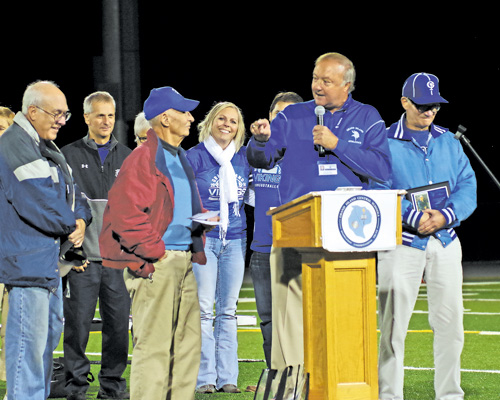 A crowd estimated at more than 2,000 celebrated the rededication Friday of the new Gene Masters Field at Grand Island High School.

The rededication honored the late Gene Masters and the school's first athletic director, H. David Myers. GIHS alumni and coaches from the '60s to the present attended the game, which heralded the first-ever night football game in Grand Island Vikings history.

"As Marv Levy used to say, 'Where would you rather be than right here, right now?'" said Grand Island Central School District Athletic Director Jon Roth during a ceremony held at halftime of the Vikings' home opener against Williamsville South. The event, billed as Friday Night Under the Lights, packed the stands and had spectators four-deep along the fence and into the end zone area. The Friday attendance dwarfed a typical Saturday afternoon crowd even at 5 p.m. for the 7 p.m. kickoff.

"The energy in the stadium is incredible," Roth said. "This is the biggest crowd in the last 50 years."

Roth thanked the community for voting to pass in December 2011 a $52 million project, and with it the new turf, stadium and lights.

Superintendent of Schools Dr. Teresa Lawrence reminded fans that what makes the Island a unique community is its interconnectivity between community and school.

"We know that about 56 percent of our employees are Grand Island residents," she said. "This project, this field, this complex, is personal."

School Board President Lisa Pyc said the game represented "an example of the collaboration of school and community. What a tribute to the teamwork and the commitment at all levels."

In 1991, the field was named after Masters, and Oct. 19, the team played its last Saturday afternoon home game on grass, beating Williamsville North, 15-0. In rededicating the field Friday, Roth presented a plaque to Masters' son and daughter, Mike Masters and Cindy Masters Khreis.

"My dad would want to first thank all the great Vikings that are along the fence and in the end zone for 38 years of great Viking football," Mike Masters said. "He would also want to thank all the coaches who coached by his side, from Gerry Gergley to Jon Roth and finally with Dean Santorio."

Roth said Myers was hired as the first male teacher in 1948, and in 1963 he was named the district's first athletic director. He laid out plans for the first athletic fields, the pool and gymnasium, and he is responsible for giving the team the Vikings name.

"It is with our deep appreciation we say thanks for being the foundation for Grand Island athletics," Masters said to the 94-year-old Myers.

"The best years of my life were spent right here at GI. I loved every minute of it," Myers said. "I had the best job in the world for 35 years."

Myers said when he first arrived at Grand Island, the faculty consisted of 13 young women and himself. ("I thought I was in heaven.") As AD, Myers said, he was blessed with the best Board of Education, best superintendents, best parents and best kids in the world. "I was fortunate enough to see the program grow from a bat and ball to what it is tonight," he said. 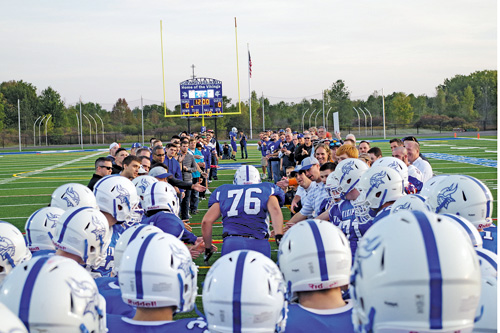 After a scoreless first quarter, Jordan Buell of South intercepted a Giuseppe Campanella pass and returned it to the Vikings' 14-yard line. On the next play, Billies quarterback Sam Castronova hit Jacob Huber in the back of the end zone with 10:18 left in the half. South led 7-0.

South scored on its next drive after converting fourth-and-six on a pass from Castronova to Matt Foster for nine yards. After a roughing the passer penalty on GI put the Billies at the Vikings '12, Jeremy Spitzberg ran it in from there, giving South a 14-0 lead they would take to halftime.

Castronova and Foster combined for a 12-yard TD pass in the third quarter before touchdown passes from Campanella to Anthony Moser of 42 and 27 yards cut the deficit to 21-14 with 9:59 to play. Moments after Moser's second score, Castronova hit Foster again on a bomb up the left sideline for a 48-yard strike and a 28-14 lead.

GI running back Jarod Brandon ran a draw play 50 yards to the South 6, and two plays later Zach Valvo ran it in to cut the lead to 28-21.

GI cornerback Jeremiah Wilkes intercepted Castronova with 5:39 left in the game, giving GI the ball a chance to tie with a drive start at the Vikings 37, but the offense went three plays and out and never saw the ball again. 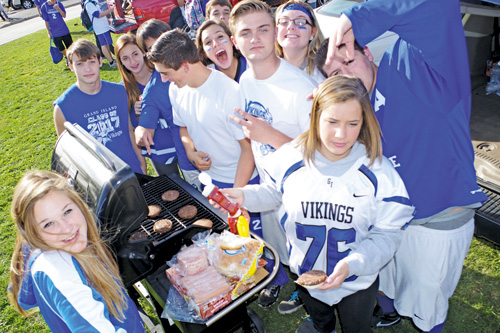