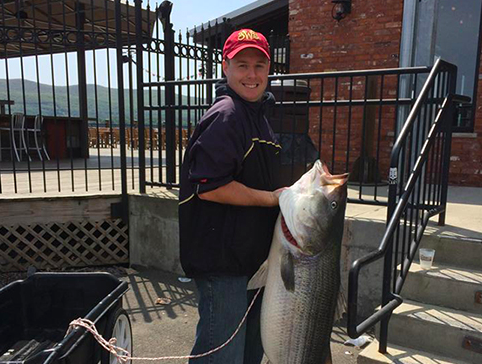 Eric Lester holds his 60-pound state record inland striped bass he caught May 14 from the Hudson River in Orange County.

"This latest state record is another great example of how New York continues to provide excellent fishing opportunities, and they continue to grow under Gov. Cuomo's 'NY Open for Fishing and Hunting Initiative,' " Martens said. "From the Great Lakes to Long Island, and everything in between, the possibilities are endless for eager anglers."

Freshwater drum are also referred to as "sheepshead," and primarily dwell in large rivers and lakes. Their pronounced blunt head allow them to be easily identified. With numerous small, round teeth made for crushing, drum feed mostly on freshwater snails, clams and crayfish. For more information on this unique fish species, visit http://www.dec.ny.gov/animals/7014.html.

VanArsdall submitted details of his winning catch as part of DEC's Angler Achievement Awards Program, which tracks state record fish. Through this program, anglers can enter freshwater fish that meet specific qualifying criteria and receive official recognition of their catch and a distinctive lapel pin commemorating their achievement. The three categories that make up the program are: catch and release, annual award and state record.

VanArsdall's catch is the second newly listed record on the New York fish and wildlife app, a free mobile app recently announced under Cuomo's initiative. On May 14, Eric Lester established a new inland state record when he caught a 60-pound striped bass in the Hudson River.

The mobile app provides up-to-date information on fishing, hunting, wildlife watching and other outdoor adventure opportunities in New York. DEC developed the app in partnership with Parks By Nature Network at no cost to the state. The app is now available for free download in the iTunes App Store and the Android Market for use on iPhone and Android devices.

The "NY Open for Fishing and Hunting Initiative" is an effort to improve recreational opportunities for sportsmen and women, and to boost tourism activities throughout the state. This initiative includes streamlining fishing and hunting licenses, reducing license fees, improving access for fishing, and increasing hunting opportunities in New York.