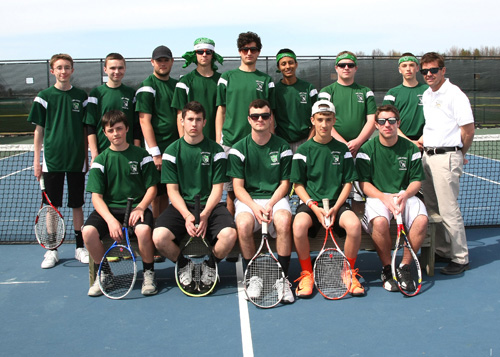 On Wednesday, May 13, the Lewiston-Porter boys tennis team defeated Kenmore East by a score of 5-0. With the win, the Lancers completed a near perfect season with a 13-1 record, and officially earned the Niagara Frontier League championship.

"It was a season in which many things came together at the right time," said Scott Townsend, Lewiston-Porter director of athletics. "The league title is the first since 1978."

Lead by Coach Paul Frederick, the Lancers team consists of many seniors, many of whom have been a member for four or more years. Senior Joe Laurendi finished the 2014 season with a singles record of 7-7, and senior Jake Warren finished his season with a 6-8 record. Sean Richardson (10-4) and Ryan Taylor (14-0) both played first and second doubles respectively. Other seniors who contributed included Jared Donaldson, Zach Keegan and Mike Laurendi.

Solid underclassmen also contributed to the success as well, as junior Yash Maheshewari finished 13-1 at 3rd singles. Eighth-grader Jack Dillon (10-4 at 1st doubles) and sophomore Tyler Richmond (14-0 at 2nd doubles) also had outstanding seasons. The three will make up the core of another competitive Lew-Port team next season.