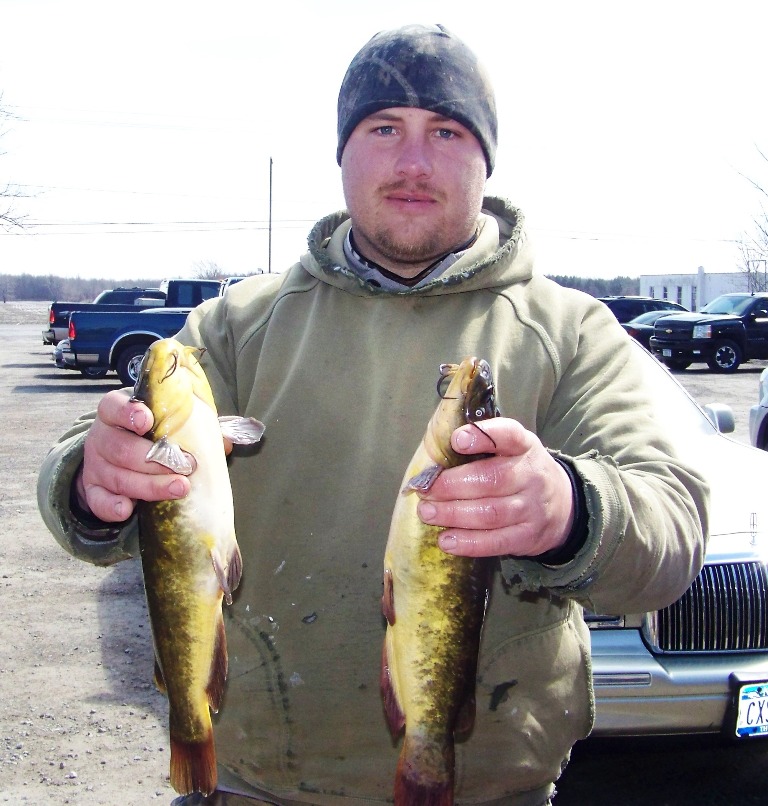 Mark Pittley of Wilson with a bullhead catch. Two bullhead contests are approaching.

There are a lot of people that don't know, or even realize this but there are many critters that can be hypnotized. It wouldn't actually put them in a hypnotic state, but more or less immobilize or relax them temporarily.

Yes, it might seem like I'm "off my rocker" or a good story for Ripley's Believe it or Not for writing a story about something like this but read on, and be sure to check out the Scuttlebutt.

There are people who claim they can hypnotize robins, horses, chickens, pigeons, cats, lizards, and even alligators. How would you even get a robin to sit still long enough, or how would you get close enough to do that to an alligator?

But take my word for it; you can mesmerize houseflies, or horseflies and others that come around you from nowhere to pester you.

A family friend/fishing friend/outdoor writer, Joe Ognibene (1925-2009), and I went on a three-day fishing excursion to Ohio some summers back, and after a day of fishing, and after having supper of fresh fried walleye and fried potato slices, we were relaxing having a few brewskis. Joe said, "See that fly on the arm of my chair? I'm going to catch him with my bare hand."

I said sarcastically, "Yeah, right, Joe, not right now, you are not up to snuff right now, you're too slow." Well, we bet a dollar, and I lost. He didn't stop with just one; he caught and released many of them alive that evening. I tried and captured three or four and gave up.

Think about it, two grown men catching flies in our hands for something to do. I guess if it wasn't fun, I wouldn't remember that particular event of that trip.

The trick to bare hand catching a fly is to move slowly toward the fly in its resting place. The fly will be looking at you, and as you extend both hands about a foot or so apart, move your hands slowly forward and back simultaneously (not up and down) until you are nearer to him and your hands are on each side of him moving closer. Now, with your quickest hand, snatch the fly. What you just did was confuse the hell out of him and he didn't know which hand the danger was coming from, or which eye to look out of, his left or his right. Try it sometime, especially with the kids.

•Getting ready for the bugs! It won't be long now before those nasty black flies, mosquitoes and other blood-sucking bugs start arriving. Black flies first. When they bite me the bite swells up in a matter of an hour, and it seems like I itch for weeks.

I heard of an oral insect repellent that you take 30 minutes before exposing yourself to the elements, and it lasts two to three hours. I saw it while watching the "Dragon's Den," a Canadian TV show where people approach millionaire investors looking for them to invest in their products to make their company grow.

The woman who developed this repellent is from Calgary, Alberta, and wanted to expand into the U.S., but needed more capital to do it. One of the TV "Sharks" bought into the company for thousands of dollars, and it is now available in this country for the first time. You can buy this oral repellent close by at The Peanut Mill in St. Catharine's, or at Vita Health Foods on Portage Road in Niagara Falls Ontario. Some Fort Erie stores have it too.

•Thousands of dead ducks this winter. The state Department of Environmental Conservation reported last week there were thousands of dead ducks along the shores of Lake Erie, the Niagara River and the Rochester end of Lake Ontario, stating that starvation was the primary cause of the die-off. The ice cover and cold temps blocked access to the food diving ducks need to sustain themselves. Sightings of dead ducks have been reported as far away as Irondequoit Bay on Lake Ontario.

Connie Adams, a senior DEC wildlife biologist and Village of Lewiston resident stated, "This winter has been harsh to all wintering waterfowl, but especially to diving, fish-eating ducks, who can't access food in ice-capped waters."

"Wintering waterfowl usually need to eat an amount of food equivalent to about 20 percent of their weight every day, and in extreme conditions or harsh temperatures, they need to consume more to sustain themselves," Adams continued. "Because of cold temperatures and iced over waters, many birds have suffered food deprivation since early winter, and are only now starting to die off in great numbers. The small pockets of open water can't provide enough food to sustain the massive concentrations of waterfowl.

"This die-off appears to be a natural, weather-related event due to the extreme and prolonged cold temperatures," she added. "Diagnostic testing by DEC's Wildlife Health Unit did not reveal any infectious diseases."

•Watch baby eagles being hatched on the Internet in live streaming video. Log on to www.eagles.org/programs/aef-nest-cam.php, turn your volume up and you can hear the other wildlife in the background occasionally and mother screeching. One egg hatched on Monday morning March 31 and more are due. There are two cams on the same nest with different angles, and are located in Pigeon Forge, Tenn. The American Eagle Foundation sponsors the cameras.

While you are at your computer, also check out the live video of the peregrine falcon nest that is located at the University of Buffalo. Visit www.buffalo.edu/falconcam.html.

•Bullhead contests coming in Wilson. There will be a three-day Bullhead Contest sponsored by All in the Same Boat Tackle and Bait Shop, 2931 Wilson-Cambria Road, Newfane, on May 11, 12 and 13. Weigh-in will be headquartered at the Wilson Conservation Club. Visit www.facebook.com/Niagaracountyannualbullheadtournament.

Two weeks earlier, Jean's Bar on Young Street in Wilson will be holding one on April 25, 26 and 27. Weigh-in at Jean's. Both have 100 percent cash payouts to the winners plus, All in the Same Boat will have a fishing rod to give away.

Also remember the annual Smelt Festival in Lewiston is on May 2. Everything is happening!

So Smart Sez: What's the difference between a mosquito and a fly? A mosquito can fly, but a fly can't mosquito.