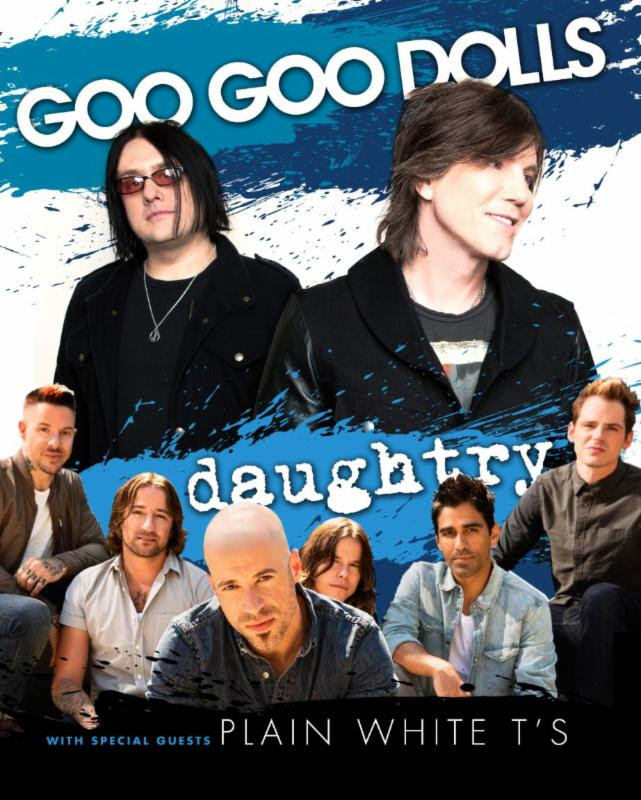 Multi-platinum bands to perform across North America all summer

Multi-platinum, Grammy-nominated bands Goo Goo Dolls and Daughtry will hit the road in June for an extensive summer amphitheater and arena tour. Also on the bill, performing an acoustic set, are Plain White T's. The tour kicks off in Wallingford, Conn., June 12, and crisscrosses North America through the end of the summer.

"We are excited to finally be teaming up with Daughtry," says Goos vocalist-guitarist John Rzeznik. "Not only are we big fans of Chris, but we think this is going to be a huge party for the fans of both our bands. The combination of the two will make for an awesome summer night of great American rock music."

"We are huge fans of the Goo Goo Dolls and have wanted to tour with them for a long time now," lead singer Chris Daughtry said. "Everyone will see more than two great bands on stage. They're going to get an incredible show every night and have a summer to remember."

The Goos are touring in support of their 10th studio album, "Magnetic," which debuted at No. 8 on the Billboard Top 200 chart and at No. 2 on the Top Rock Albums chart, propelled by the single "Come To Me" (the fastest-growing single in the Goos' history).

Daughtry is touring in support of their fourth album, "Baptized," which was released Nov. 19 and debuted at No. 6 on the Billboard Top 200. Daughtry's latest single, "Waiting For Superman," is top 15 at Hot AC and has sold more than 500,000 downloads. The band is currently on a European and sold-out U.K. tour.

Buffalo's Goo Goo Dolls have become one of the most globally respected and influential forces in popular music history, selling more than 10 million albums since 1986. They have scored 14 top 10 radio hits (more than any other artist in the history of the Hot AC format), including "Name," "Slide" and "Iris," the latter spending nearly 12 straight months on the Billboard charts and holding the No. 1 position for 17 consecutive weeks. The band, which also features bassist Robby Takac, has toured the globe countless times, performed in front of millions of fans, received numerous awards (including four Grammy Award nominations), and recorded and released nine studio albums.

In addition to recording and touring the globe, frontman Chris Daughtry is also dedicated to using his position to raise awareness about a number of charitable causes, including an ambassadorship with DC Comics and its "We Can Be Heroes" campaign.

The Goo Goo Dolls and Daughtry summer tour dates with Plain White T's are as follows: