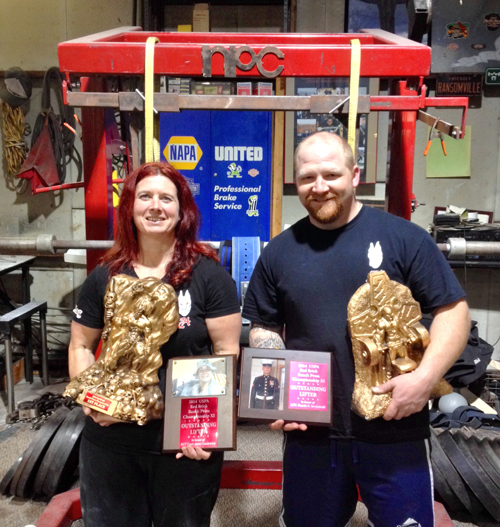 Pictured, from left, are Penny Rodden and Dan Zahno.

Niagara Powerlifting Club members Dan Zahno and Nick Figura, both of Ransomville, and Penny Rodden, of Niagara Falls, all did well at the recent USPA Red Brick Bench Press Championship XI, held at the Connecticut Street Armory in Buffalo.

Zahno took first place in the 220-pound division and broke his own state record with a 451.9-pound bench press. He was awarded an Outstanding Lifter Award in honor of fallen Marine Lance Cpl. Timothy G. Serwinowski of North Tonawanda.

Meet director Dennis Brochey reported the event attracted more than 130 of the top bench pressers from across the state. The event has served as a fundraiser for military families, raising more than $100,000 since its 2004 debut.

This year's event raised $10,000 for the Iraq/Afghanistan Memorial, to be built at the Buffalo Naval Park this year. Additional funds will go to both the Veterans Legal Support Group and to the WNY Military Family Support Group.