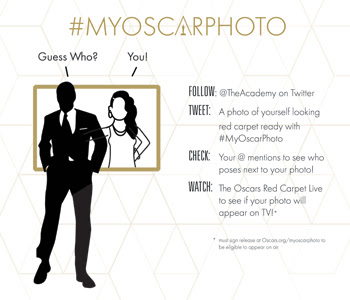 Fans who follow @TheAcademy and tweet a red carpet-ready photo of themselves using hashtag #MyOscarPhoto will be eligible to have their photo featured on the red carpet. (ABC/A.M.P.A.S. image)

For the first time, Oscar fans watching the "Oscars Red Carpet Live" show on March 2 on ABC will have the opportunity to see themselves next to the stars on the red carpet through Twitter.

Starting today, fans who follow @TheAcademy and tweet a red carpet-ready photo of themselves using hashtag #MyOscarPhoto will be eligible to have their photo featured on the red carpet.

On Oscar Sunday, arriving nominees, presenters and performers will pose in front of a video wall showcasing fan-submitted photos and generating unique images that will be tweeted back to the original submitter through the @MyOscarPhoto Twitter account.

Additionally, some of the submitted photos will appear on the "Oscars Red Carpet Live" telecast beginning at 7 p.m.

To be eligible, fans must sign the online release form located at www.oscars.org/MyOscarPhoto.

"This is a way to create an once-in-a-lifetime experience for fans and give them the opportunity to literally be a part of the red carpet excitement," said Josh Spector, the Academy's managing director of digital media and marketing. "We think it will be a lot of fun - not only getting to see a photo of themselves on the red carpet, but also getting to see who poses in the photo with them."

"The Academy has long been one of the most innovative partners when it comes to creating a truly social Oscars," said Andrew Adashek, television partnership manager at Twitter. "We're excited to see them strengthen their connection to the Twitter audience by letting our users get closer to the red carpet experience than ever before."

During the broadcast, hosts will describe to viewers at home how they can use Twitter to participate in #MyOscarPhoto and provide updates on the experience throughout the show.

In addition to the #MyOscarPhoto red carpet experience, the Twitter Mirror in a frame designed by Architectural Digest will be placed in the Oscars greenroom to give fans at home more behind-the-scenes access to the show. The stars of the show will stop by the Mirror to take candid photos of themselves, which will be tweeted throughout the night from @TheAcademy.

Awards for outstanding film achievements of 2013 will be presented "Oscar Sunday, March 2," at the Dolby Theatre at Hollywood & Highland Center, and televised live on the ABC Television Network. The Oscars, produced by Craig Zadan and Neil Meron, will be televised live in more than 225 countries and territories worldwide.