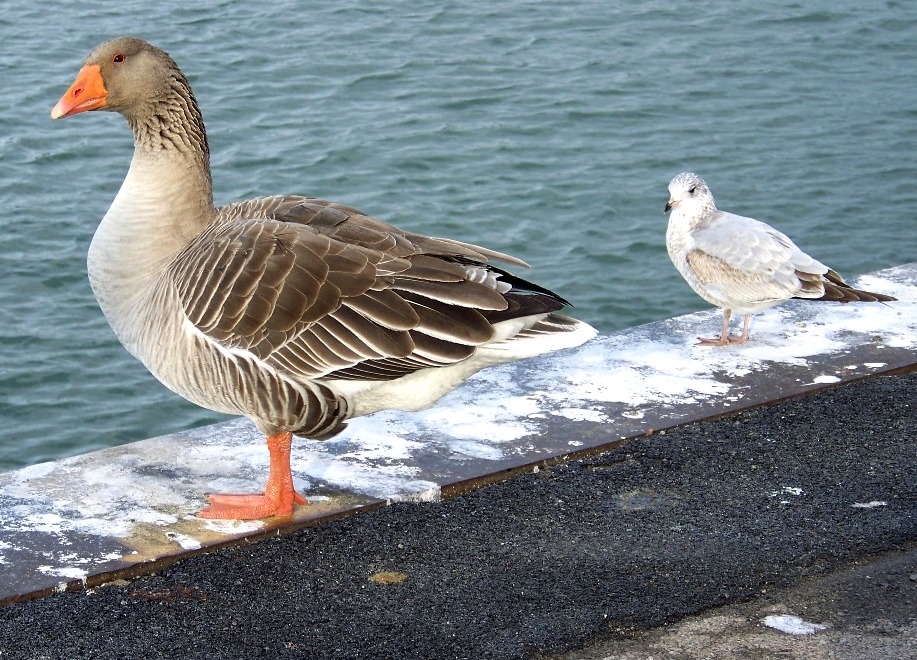 "Lewiston Louie" with a friend.

He has a round, heavy looking body, a thick and long neck, and a large head. He also has pink legs and feet, and an orange bill. It is believed he had dual citizenship, U.S. and Canada. He hangs out with a floozy named "Lady Louise," believed to be a Canadian beauty.

That kind of describes who we are looking for. He hasn't been seen for a couple of years now, and his whereabouts remains a mystery. There were early reports of him being spotted sitting around the Stella Flats a couple of times, but nothing of substance, but he definitely was seen a few times crossing back into Canada staying a day or two, bypassing the Customs and Immigration. Where is Homeland Security when you need them? Maybe he had a green card?

This guy was considered as the new Lewiston harbormaster for quite some time. He hung out at the landing and became friends with hundreds of people.

"Lewiston Louie" as he was named, was a barnyard goose that was hanging out at the Lewiston landing/launch ramps from 2009 to part of 2011, apparently spending 2008 in Canada. In the early years of the sighting, good friend, lifetime outdoorsman, bird consultant, fisherman, among other things, Gerry Condren (1934-2014) of Youngstown, said it was a domesticated barnyard goose that probably "flew the coop" from a local farm because it was so people friendly. And that it was. Condren also said it was also called a "Graylag Goose" and its scientific name is "Anser anser." Now, if it could only talk!

People came to the landing just to hang out with him and many brought cracked corn, bread, and other things like dry dog or cat food, which he devoured. If he was hungry and you approached him with food he would trot right over and eat out of your hand, and in a gentlemanly way. Parents also brought their children to see and feed Louie.

There was a suggestion one time that the village be approached to get some hay bales down there so Louie could have some kind of protection from the weather. Nothing ever came of that idea.

During his presence, he gained a lot of friends at the landing, and in 2008 he and his female goose mate used to hang out near the Queenston boat launch across the river according to an email I received at the time from Joanne Cummings and Gord Brown from St. Catharine's. Cummings said the fishermen on that side of the river were feeding Louie peanut butter sandwiches. She also said, the female disappeared forever one day and "the goose (Louie) was so lonely, you could hear him honking when coming in for a landing."

Yes, Louie had a lot of friends in Lewiston. Seagulls would hang out around him and even though you can't tell one gull from the other, there was one that hung pretty close to him. It was determined by the dock fishermen that it was a female seagull because it was the only one that would land when Louie landed and hung so close to him. Hmm, a close relationship? If you walked by Louie, she would stay right there next to him, and not fly away like all the others did.

That seagull was seen so often, the whole neighborhood was talking about her. There was a contest among fishermen to suggest a name for her. "Lady Louise" was selected as the one, and was later known as "That Floozy, Lady Louise."

The picture you see here is of Louie and that floozy, Lady Louise. And if you want to see a lot more of them go to the Outdoors Niagara website, also, you can read more stories about Louie and his lady friend. There is also a picture there of Louie's first mate when they were residing in Canada, submitted by Joanne Cummings and Gord brown (http://www.outdoorsniagara.com/lewistonlouie.htm).

Last summer there was another graylag goose hanging out at the Tuscarora State Park launch ramp. It was very friendly and looked just like Louie. When I was there, a family of three walked down to the boat launch area to fish, and when they were having a snack the graylag walked over to them looking for a handout. There was a little girl with them and she was frightened for a bit at first, until she tossed a treat to him, then they became best friends during their visit. If she got up and walked around, there was the goose right behind her. I got some pictures, and one of her posing with "The Graylag at Wilson Harbor."

If anyone else in our area has spotted a graylag goose other than residing in a barnyard, let me know. Next week I'm going to tell you a little about Chuck Wills Widow.

•I want to share an email with my readers that I received from Dale and Dorothy Ellsworth, and I would like to publicly thank them for their comments.

"We enjoy all of your columns especially those concerning the small wildlife right around our area. Many of us see these critters in our yards and fields, but know little about them. Your stories and explanations are a great teaching tool for us and for future generations."

"The '42 Willys story reminded me of a story of my own about 1942 and cars not being delivered! My aunt worked for Lammerts Buick/Cadillac on Sixth Street. Late December of '41 when the decree came down from the government that any car ordered had to be delivered by Jan. 1, 1942, or remain in the showroom. My aunt heard the news on the radio, went to work early on New Year's Eve morning and called the regular customers who would be due for new cars, she sold and had the customers on all seven cars in the showroom on December 31st. The salesmen were not very happy with her - Mr. Lammerts was pleased though."

"Your story of Dowsers brought back memories. In the early 1950s Phillip Torba lived on Sunrise Beach on Lake Ontario. Phil used a willow branch to determine where the water was good. He located wells for my brother and I, for his son Ken and other neighbors. All these wells were between 75 and 80 feet deep with excellent water. One old neighbor didn't want to listen to Phil and selected his own spot for a well - his well went dry every summer. I could go on all day with stories of my own brought to mind by your articles." Thank you Dale and Dorothy.

•Rod Fairbank of Youngstown approached me one day and was telling me how much he liked the 1942 Willys car story and how it reminded him of when his father had a post war Willys Jeep that he drove around in the early '50s. That Willys story was my favorite to tell.

•American Bald eagles spotting over the lake: Two of them have been flying right by my picture window overlooking the lake. I would say 20 and 30 feet above the water, probably looking for prey. I wish I could find where they are nesting. A couple days ago, there was a small group of about 25 ducks doing what ducks do in the winter, and the eagle circled them, flew off, and came back then circled again before taking off again. I thought Oh, boy; he's looking for some easy pickings there. I kept watch for a long time and never saw him again that day, thinking he probably stole a meal down the lake where I couldn't see him. I asked my neighbor, Loretta Berry, a bird enthusiast, if she spotted these guys recently, and she said she hasn't noticed, but from now on she is going to pay more attention.

•Please be generous to your neighborhood birds, because they can't fend for themselves with all the snow and cold temperatures. They need your help.

"So Smart" sez: "Teach a man to fish and he will quit work"