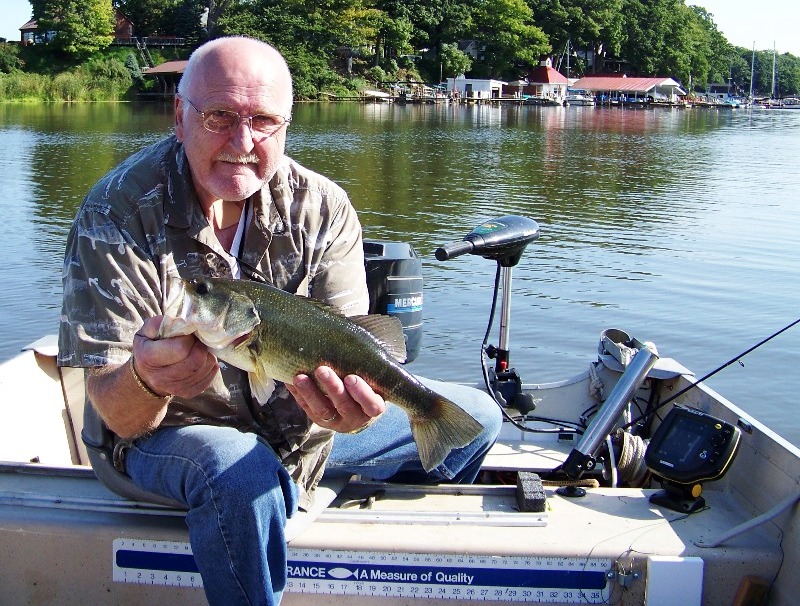 Can you name the 11 Finger Lakes? How about the six Great Lakes?

Fishing a Finger Lake; there are six Great Lakes?

Can you name the 11 Finger Lakes? How about the six Great Lakes?

I can hear a lot of you saying, "That Mark Daul is losing his mind," and saying, "There are not six Great Lakes, there are only five, and I can name them: Superior, Michigan, Huron, Erie and Ontario."

If you want to make a little money on the side, bet someone there are six Greats, then tell them what the sixth is, but you need to read the Scuttlebutt in this story.

Some years back, there was a mix of fishermen from this area that were making day and weekend trips to Seneca Lake, mostly for perch fishing in the fall, never planning anything or organizing anything beforehand. It meant we gathered near the Village of Dresden, located almost halfway down the west side of the lake on Route 14, across the lake from the Sampson State Park. Samson State Park used to be a naval base, and later became a training base for the Air Force during the Korean War. There was a small boat launch at Dresden, and we fished for perch, chain pickerel and northern pike a little way out from the launch, right on the edge of a large weed bed there. Chain pickerel are not a mainstay in Seneca, but they are there, along with several other species that make that lake their home, like bass, salmon, trout, etc.

Northern pike is one of those several species, and they just loved a shiny spinner like a No. 5 Super Vibrax. By casting the lure over the top of the weed beds, they would rise up and snatch it quicker than you could blink an eye. And you had better have a steel leader at the end of that line because with their sharp teeth they would chomp right through your monofilament line and take your $4 lure with them.

There was a large platform where we fished at Dresden, about half way out in the lake from the village that would remind you of an oil derrick. We asked people around the area what it was and no one seemed to know exactly. Some suggested it was some kind of government operation. Many years later, maybe when the secret couldn't be held any longer, it was found out that the Navy was working hard on a side-scan sonar which was patented just after World War II. It was finally perfected at this base later.

More modern sonar, like what's used on ships and what we use on our fishing boats today, could only reflect signals straight down, from the top to the bottom of the lake, only defining the lake bottom and anything in-between (like a fish). With side-scan sonar, a signal could be sent out scanning a much wider area of the bottom and side, and the imagery being more defined, like three-dimensional. Back in the "old" days there wasn't computers and the technology like we have today that could define objects underwater. Side-scan sonar can define objects like sunken ships, submarines, pipelines, etc. Today, fishermen are more sophisticated using that side-scan technology, and it was perfected right at that Seneca Lake Sonar Test Facility. Fishermen are using underwater video cameras today also.

When I first started my excursions to Seneca, I'd tow a fiberglass boat that weighed around 1,500 pounds that I used for fishing Lake Ontario, the river and anyplace else I happened to go. One day I was talking to myself while fishing from that boat at Seneca. I said, "Self, you don't need a big boat like this to catch a little perch."

I agreed with myself, and replied, "You should look for a smaller boat when you get home." I did; I found one the day I got home after mentioning to my son, Danny, about getting a smaller boat for these trips. He replied, "Dad, Chet Kimball is selling his boat, motor and trailer, why don't you go and look at it, it's like-new."

I did, struck a deal, and drove home with it. I still use that fish-catching machine today. It's a 16-foot aluminum Starcraft boat with a 25-horsepower motor. I fondly named it after its original owner, Chet Kimball, and called it the "Chetboat." After all those years of my ownership I had to replace the wood floor, install new carpeting, fresh paint, update the electronics, along with new rod holders, and converted the 25-horsepower motor to electric start. This boat is a real threat to any fish that drops by, so send the word out, "All fish stay away!"

Real lazy huh? Of course, you can't see the seat I'm sitting on, but it is a bucket swivel seat with a fold-down backrest. My fishing partner up front has the same comforts - seat, rod holders, digital depth sounder, cup holders, etc.

There was a bill presented to Congress in March 1998 that included a line put into legislation by Sen. Patrick Leahy of Vermont, allowing money for federal research under the National Sea Grant Program, giving Lake Champlain designation as one of the Great Lakes. Without any kind of beforehand announcements or political strutting, often seen on these types of bills, it was quietly signed into law by President Bill Clinton.

Lake Champlain is now considered for federal research dollars from the Sea Grant program. Remember a law is a law, just like the Safe Gun Act is a law. In my way of thinking, that has diluted research money for our own original five Great Lakes, especially the way budgets are being cut back to the bare bones nowadays. Money is a lot different now than it was in 1998. One of the examples of cutbacks is the growing threat of grass Asian carp invading the Great Lakes, which will soon become a reality if there isn't more money budgeted for that intrusion of our lakes.

So, go make your bets, as long as it isn't with another NFP reader!

•Do you know Lake Champlain is bordered by a county named "Clinton County?"

•Do you know Lake Champlain drains into the St. Lawrence River like Lake Ontario does?

•Did you know in 1609 Samuel de Champlain saw a lake monster five feet long in Champlain?

•Do you know which Great Lake is entirely bordered within the United States?

•OK. Do you know which one is the deepest? Shallowest?

•Seneca, commonly known as the "middle finger lake," is the longest and deepest of all the Finger Lakes at 618 feet deep. The deepest lake in the world is in Russia at 1,642 feet.

•Jim Trimboli of Lewiston sent an email with a picture of an eagle sitting high up in a tree about one-half mile north of Joseph Davis State Park, on Lower River Road. Trimboli owns property and lives on Pletcher Road where it butts up against the park.

"We see all kinds of wonderful wild life coming out of those woods from foxes to turkeys to humming birds," he said.

Thanks for the update from all of us Jim!