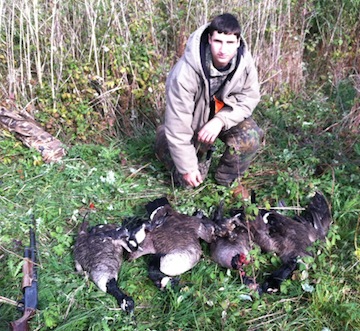 Start 'em young and they will never forget. I have several grandsons and only two granddaughters. Of the grandsons, all are hunters or aspiring hunters, some are too young yet, and some just getting into learning. The young man you see in the picture is grandson Jesse, who I found out just can't get enough. That above heading is his from an email he sent me a few days ago.

His father, Danny, was the one who kick-started Jesse into his young adventures of being into being an outdoorsman. It started when Jesse was old enough to hold a fishing rod, with his older brother and his younger brother standing at his side. In time, he graduated into firing a small caliber rifle on the 3F Club range, under the guidance of his dad and others. This young man had a penchant for hunting and got his first whack at it at an early age. Now, being 16 years old, and having gone to his sanctioned safety training courses, he obtained his hunting license and can hunt on his own, joining the other nearly 700,000 hunters in New York state. And that doesn't count the 50,000 or so non-residents that enjoy the state's quality hunting opportunities, too.

"Saturday and Sunday, I went duck and goose hunting, I got four big geese and two ducks. Couldn't figure out what kind of ducks, I thought they were black ducks but not positive."

All were prepared for the freezer, except one - a goose almost consumed by his brothers and father that evening, and the leftovers refrigerated. Chatting with him a couple of days ago, I asked about the rest. He replied, "Oh, they are eaten up now, and I took the last big breast to uncle Joe's cabin last weekend, cooked it up and now everything is gone." He added, "Golly, I just love eating those things."

Jesse has a good hunting and fishing pal, Cody Wyatt. With their ages pretty close, he is also an avid outdoors guy, a young guy that loves to fish, hunt and trap - skills he learned from his father and uncles. Now Cody and Jesse do those things together, sharing their thoughts and skills with others, me included. When those two get together, it is like going to a hunting lodge listening to their tales, about what they learned, how they called in their game, how they stood when lining up their shot, etc. It doesn't end. Neither of these young men will rest until the first deer has fallen before them.

How many can remember the show on Canadian TV called the "Scuttlebutt Lodge" hosted by Red Fisher? It was an extremely popular show that ended in the late '80s and they always talked hunting and fishing with a little video thrown in between. That is what these two remind me of - all they need is an audience.

Together Jesse and Cody find places to hunt and how to ask to hunt on posted land. Cody just came back from a hunting excursion with his father and uncles to the Southern Tier. He showed me pictures of a couple of deer the uncles got that opening weekend and he was so excited, at first I thought they were his that he sighted in. Cody got skunked that weekend, but said, "I haven't got my first deer yet, but I'll get one before the season ends. Got lots of time."

Yes he does, a whole lifetime.

Another email from Jesse read: "Well gramps my good friend Cody got me into trapping. I went on nysdec.com and found out what I need to do to get my trapping license. I printed out the trapping education worksheet and am filling it out. Now the courses are free."

I'm thinking, from fishing, to hunting, and now trapping? I know some trappers, and that I think is a very highly skilled sport from the stories I have listened to. Knowing when, where, how, what kind of critter, what kind of trap, where to set them up, and how to set them, are all things a trapper must learn before becoming skilled or even being good at it. You even have to know how to release an unwanted trapped critter safely and how to get a trapped critter you want to keep so you don't get hurt. I'm thinking like an old man so all that stuff is to be left up to the younger men. More to come.

Niagara County - A mecca for hunting

City slickers who don't venture to the outskirts of town have a lot to learn about their own county. Niagara County is blessed with some of the most precious hunting and fishing opportunities that just about anyone can access. We have big game, small game, birds, big trout and salmon besides a whole aquarium of other edible fish.

Pretty soon we just might be adding mountain lions to that list. In one of my previous stories I mentioned about Lewiston's mountain lion, the "cat of many names." I also mentioned an email I received from Youngstown's "mystery woman" and her seeing what looked like a mountain lion or "big cat" of some kind going down the bank toward the lower river one day.

Not to create a frenzy, but Ed Rath lives in Youngstown and was out hunting the local woods on the third day of opening season this year and spotted a "cat of many names." He referred to it as a mountain lion.

Rath is a senior hunter with many years of hunting experience under his belt along with his many years of gun ownership, and is a person involved with antique rifles and such. Rath is also a student of the Civil War who travels to historic Civil War battlefields.

Rath described his sighting and said he was deer hunting on the Monday after the season opened on one of his favorite trails in the Town of Porter. He was watching down a trail that divided the woods in case by chance a deer would cross. As he was looking, something appeared about 150 yards from him on that trail and he wasn't sure what it was at first. But he knew it was something big and interesting "enough to spring out the binocs" as he called them and said he didn't believe his eyes at first. He said it reminded him of a very big cat of some kind the way it was walking, and then it stopped, looked and stared at him. Rath was startled at first and then as he watched, the animal turned its head and sauntered across the trail into the woods. At that time Rath recognized the tail and how it had the long distinct downward and up curve to it. He also said he knows the animal couldn't scent him because the wind was downwind from the animal and figured the contact was visual.

I asked Rath if he was scared and he said no, he knows they are more scared of him than he is of them. Besides, Rath spotted a deer that was too far away to shoot at, but noticed it limping, so he figured that mountain lion would rather eat deer meat instead of him.

Rath also commented, "I know how rare these things are around here, and if there is one, there should be two." He notified the owner of the farmland where he sighted it.

Just this week Jesse contacted me and told me he bagged his first deer. It was a big 10 pointer harvested over on Balmer Road. Right after hearing about Jesse's excitement, I got word that my other grandson, Justin, missed his chance at two different deer. Justin has had all his training, but is a little too young to be able to hunt without a licensed adult. More on that later. Remember, all these things are right here in Niagara County - in our own backyard.