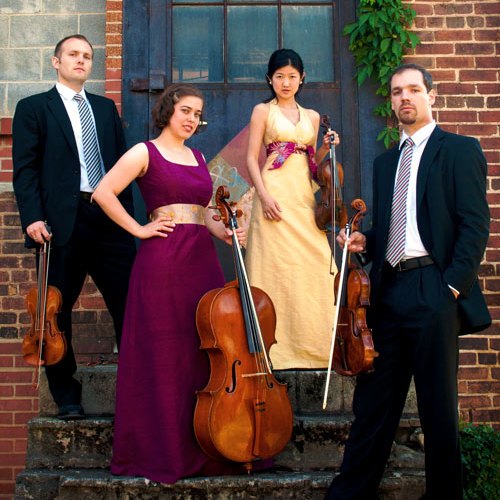 The 90th season of the Buffalo Chamber Music Society continues Tuesday, Dec. 10, with a performance by the Jasper String Quartet, winners of the 2012 Cleveland Quartet Award. The concert begins at 8 p.m. in the Mary Seaton Room of Kleinhans Music Hall. A "Chat with the Artists" beginning at 7:15 p.m. will precede it with host Peter Hall. The concert will include quartets by Haydn, Bartók and Mendelssohn.

Winner of the prestigious 2012 CMA Cleveland Quartet Award, the Jasper String Quartet has been hailed as "sonically delightful and expressively compelling" (The Strad) and "powerful" (The New York Times). The Classical Voice of North Carolina said the act plays "with sparkling vitality and great verve ... polished, engaged, and in tune with one another." Based in New Haven, Conn., the Jasper Quartet recently released two highly acclaimed albums for the Sono Luminus label, featuring the works of Beethoven, Schubert and Aaron Jay Kernis. The quartet is the ensemble-in-residence at Classic Chamber Concerts in Naples, Fla., and, in conjunction with Astral Artists, the Jaspers were awarded a 2012 grant from Chamber Music America through its residency partnership program.

After winning the grand prize and audience prize in the 2008 Plowman Chamber Music Competition, the Jasper Quartet went on to win the grand prize at the 2008 Coleman Competition, first prize at Chamber Music Yellow Springs 2008, and the silver medal at both the 2008 and 2009 Fischoff Chamber Music Competitions. The quarter was a winner of Astral Artists' 2010 National Auditions, and was the first ensemble to win the Yale School of Music's Horatio Parker Memorial Prize, an award established in 1945 for "best fulfilling ... lofty musical ideals." In addition, the foursome recently completed its 2010-12 position as ensemble-in-residence at Oberlin Conservatory.

Tickets for this concert are $20 ($10 for students), and may be purchased online at www.bflochambermusic.org or at the door.