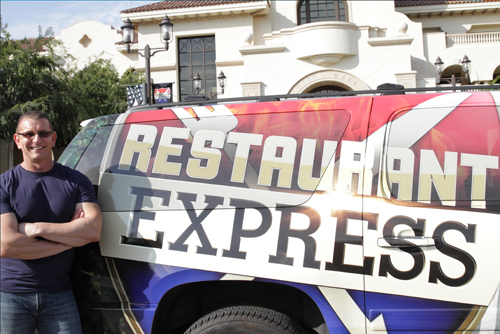 Chef Robert Irvine heads to Las Vegas to give nine chefs a chance at fulfilling their lifelong dream of launching a restaurant in Sin City in his new series, "Restaurant Express," premiering Sunday, Nov. 3, at 9 p.m. on Food Network. Over the course of seven episodes, the chefs will visit different cities and locations travelling aboard the "Restaurant Express" bus, competing in challenges that test their culinary skills and business savvy as potential restaurateurs. After each challenge, Irvine will review their performances, with one chef being eliminated each episode. The final contestant standing wins an opportunity help launch and become the executive chef of a restaurant at the M Resort Spa Casino, just minutes away from the Las Vegas strip.

" 'Restaurant Express' tests every aspect of the aspiring restaurateurs' ability to launch and run a successful restaurant," said Bob Tuschman, Food Network general manager and senior vice president. "Robert's expertise as chef, restaurateur, and tough mentor make him the perfect host to push the competitors to their limits, giving them a chance to win a life-changing opportunity."

In the premiere episode, Irvine welcomes the nine chefs and aspiring restaurateurs to Las Vegas as they board the "Restaurant Express" bus. Right away the contestants realize there are only eight beds on the bus, and they must pitch themselves and their dream restaurant concept to Irvine. One chef's vision comes up short as he/she fails to make it aboard and is left behind as the journey begins. For the next challenge, the competitors are charged with creating a restaurant with only $500 and six hours before they'll be serving to a hungry crowd of 250 people. The challenge is all about profit, and Irvine tells the contestants that the bottom three earners will have to face him in a review. Irvine decides which other contestant will be sent home, with the remaining seven one step closer to their dream.

With more than 25 years in the culinary profession, Irvine has cooked his way through Europe, the Far East, the Caribbean and the Americas, in hotels and on the high seas. He brings his experience to Food Network as host of "Restaurant: Impossible" and has been previously seen on "Dinner: Impossible," "Worst Cooks in America," "The Next Iron Chef: Super Chefs" and "Food Network Star." A native of England, Irvine joined the British Royal Navy at the age of 15 and his skills in the kitchen soon came to the attention of his superiors. As part of his service for the Royal Navy, he was selected to work on board the Royal Yacht Britannia where the Royal Family and their entourages regularly dined. During his time training U.S. Navy chefs as part of a guest chef program, Irvine worked in the White House kitchens and his creations were served to high-ranking government officials.