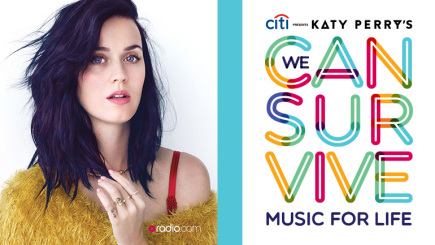 Citi today announced the launch of an extensive collaboration with Katy Perry in conjunction with the release of her third studio album, "PRISM," due out on Capitol Records Oct. 22. Citi will partner with Perry on a special event on Oct. 23, "Katy Perry's: We Can Survive" at the famed Hollywood Bowl in Los Angeles. The special concert event benefits Young Survival Coalition and will be produced by CBS Radio. The performance will celebrate the release of Perry's highly anticipated album and will be her only U.S. concert performance this year.

Citi will offer preferred seating and a unique pre-show experience with Katy exclusively for Citi ThankYou card members starting tomorrow, in celebration of new entertainment benefits of the Citi ThankYou Preferred credit card. Citi will also offer a presale to Citi credit and debit card customers where they can purchase tickets prior to the general public, starting Sept. 24 on www.citiprivatepass.com. As part of this strategic relationship, Citi will also partner with Perry on her future tour.

"I'm so excited to partner with Citi for a special premiere of songs from my new album, 'PRISM,' at the Hollywood Bowl. I'm looking forward to extending our partnership across the country with my tour next year," Perry said.

Perry cemented her status as a best-selling superstar with the global success of her second studio album, "Teenage Dream," which debuted at No. 1 in eight countries and spent more than two years on Billboard's Top 200 album sales chart. She became the only female artist to have five No. 1 singles from one album on the Billboard Hot 100 chart ("California Gurls," "Teenage Dream," "Firework," "E.T." and "Last Friday Night"). "Roar," the first single from her forthcoming new album, became Katy's 10th No. 1 Top 40 track after debuting at No. 1 on iTunes in 68 countries with 557,024 downloads in its first week of release - the biggest digital song sales week of 2013.

"Our customers love getting early access to the best in entertainment, and we're thrilled to partner with Katy on this exclusive event and future tour," said Jennifer Breithaupt, SVP of entertainment marketing for Citi. "It's terrific to see the joy that her music brings to fans, as captured in our new advertisement featuring her latest hit single."