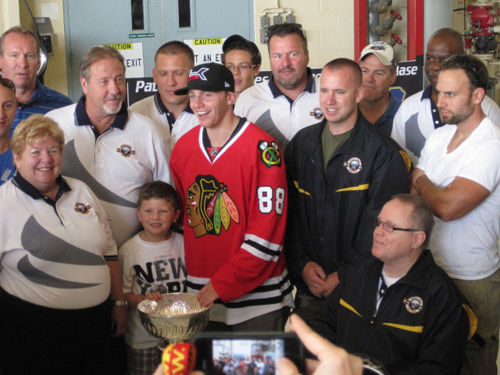 Stanley Cup, Kane arrive at base

Article and photos by Mark Dryfhout

In the cool morning hours of Saturday, Aug. 24, a crowd of men and women in military uniforms, hockey fans in jerseys and media with cameras gathered excitedly in one of the Niagara Falls Air Reserve Station's hangars.

It was 8 a.m. and this crowd couldn't be happier to be awake and waiting nearly two hours to watch Chicago Blackhawks player Patrick Kane arrive in style atop a military Humvee bearing the hockey world's most iconic trophy: the Stanley Cup. The crowd cheered as the Buffalo native hoisted the trophy triumphantly over his head atop the powerful military vehicle.

Congressman Brian Higgins praised the athlete in a short and flattering speech. "Not only has he improved on the ice as a player," said Higgins, "but he's also grown as a fine young man."

Col. John Higgins, commander of the New York Air National Guard's 107th Airlift Wing, presented the hockey player the Coin of Excellence - a customary symbol of appreciation - on behalf of the military personnel stationed at the base.

"It's a great honor," Kane said later as he held the coin. "Things like that go a long way. Receiving something like this is amazing. It hits home hard."

Kane, after being officially welcomed, gave a brief speech, sincerely thanking the men and women in the armed forces and honoring the opportunity to visit the base. His speech also promoted the Wounded Warriors program. Kane posed for pictures with group members immediately following his speech.

With the formalities out of the way, the crowd lined up for individual photo opportunities with the Stanley Cup. The airbase provided a photographer for those who had a special pre-order ticket to get their moment with the cup immortalized.

Needless to say, the crowd wished Kane would leave the cup in Buffalo.