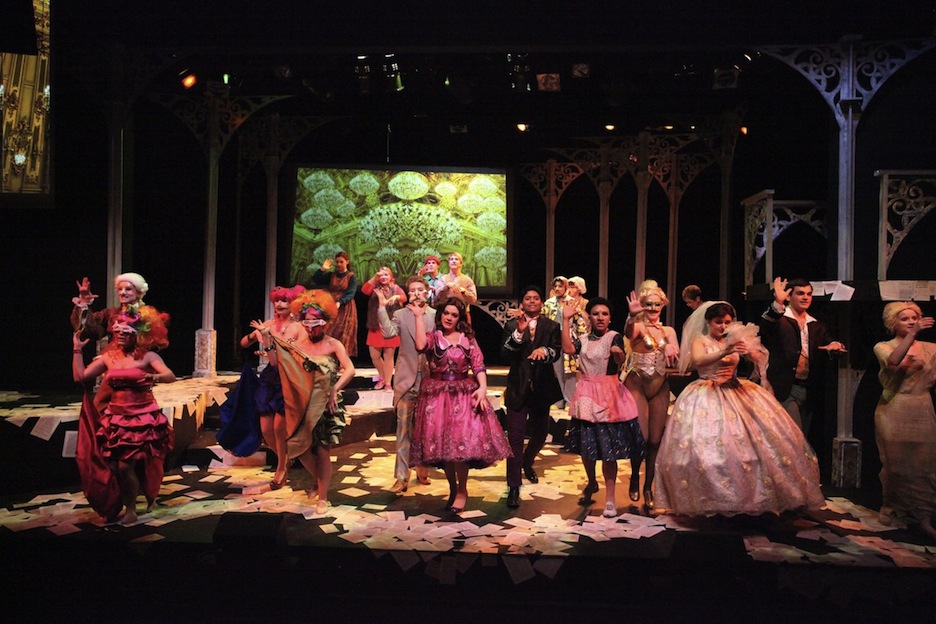 NU Theatre staged the hit Stephen Sondheim and James Lapine musical "Into the Woods" this past spring. During its upcoming season, NU Theatre will present two new musicals: "Curtains" and "Bat Boy: The Musical," as well as several comedies, dramas and a short play festival.

Fifty and fabulous? No doubt about it! This season Niagara University Theatre celebrates its 50th anniversary season with what is expected to be an exciting array of entertainment options to suit a variety of tastes.

Steven Braddock, director of Niagara University Theatre said, "We are extremely honored to dedicate the upcoming 2013-14 season to our late director emeritus, Brother Augustine Towey, C.M., Ph.D, who passed away in November of 2012. In honor of Brother Augustine, one of Niagara University's founders and the creative force behind NU's theater program for more than 45 years, we will be pulling out all the stops to offer two hit musicals (off-Broadway's 'Bat Boy: The Musical' and the award-winning Broadway production 'Curtains'); one romantic and one slapstick comedy ('The Philadelphia Story' and 'The Comedy of Errors'); two thought-provoking dramas ('The Secret Life of Girls' and 'A Piece of My Heart'); our annual student-directed Short Play Festival; and the NU Players production of 'The Shape of Things.' The entire season will be produced in the renovated William P. and Marie Leary Theatre in the Elizabeth Ann Clune Center for Theatre, with the one exception of our annual collaboration with the Castellani Art Museum where an art exhibit is especially curated for a readers' theater production."

•From Oct. 3-7, NU Theatre will present "The Secret Life of Girls" by Linda Daugherty and directed by adjunct professor Amanda Lytle Sharpe.

This frank, unflinching, timely play spotlights the devastation caused by bullying in the form of gossiping; using friendship as a weapon; name-calling; exclusion; spreading rumors; forming cliques; and manipulation. Based upon interviews with girls on the giving and receiving end, the play highlights the impact of "cyberbullying," and is by turns both humorous and heartbreaking. A penetrating look into teenage angst, this family event offers the opportunity for insightful dialogue following each and every performance.

Ripped straight from tabloid headlines, "Bat Boy: The Musical" is a love story with a wicked bite, set to an outstanding pop-rock score. The production won awards for best Off-Broadway musical, including the Lucille Lortel Award, two Richard Rodgers Awards from the American Academy of Arts and Letters, and the Outer Critics Circle Award in 2001.

Rescued from a West Virginia cave and taken in by the compassionate wife of the local veterinarian, our pointy-eared hero quickly learns to speak and act in civilized ways - even falling in love with his mentor's daughter. But would you let your child go out with him? Fast-paced and hilarious, this quirky cult satire offers clever musical numbers, a hilarious plot, surprising twists, and a lesson in the agony of being different.

Set in 1939, the story opens on an opulent estate where a wedding is to take place. Barry's comedy centers on a beautiful, sophisticated, wealthy socialite whose wedding is complicated by the simultaneous arrival of her dashing ex-husband and an attractive journalist.

Goodness! What's a girl to do?

•What's there to do after the holiday season ends? From Jan. 17-25, 2014, NU Theatre's annual Short Play Festival makes for a fascinating dose of theater - and a great entertainment bargain. Three cycles of 10-minute plays written by various playwrights will be presented over two consecutive weekends. Comedies, dramas, and everything in between, its the debut of nearly two-dozen student directors producing a smorgasbord of professionally published plays.

If one production is not to your taste, you only have to wait 10 minutes before the next one. (With some plays, adult situations and language may be an appropriate warning to anticipate.)

Inspired by Keith Walker's heart-wrenching oral history of the same title, this is a powerful, gritty, true drama of women who were courageous enough to walk into hell. "A Piece of My Heart" is a compelling piece about making the choice to serve in the Vietnam war and the lifelong consequences of that decision.

•From Feb. 21 - Feb. 23, the NU Players will present an all student-designed and directed production of "The Shape of Things" by Neil LaBute. How far would one go for one's art? What would one sacrifice for love? A thought-provoking piece that challenges one's most deeply entrenched ideas about the two.

A modern version of Adam's seduction by Eve, LaBute's play is an intense and often unsettling study of the uses of power and the stretching of ethical boundaries within human relationships.

•From March 20-30, Niagara University Theatre will present William Shakespeare's rollicking classic, "The Comedy of Errors," directed by artist-in-residence (stage combat) and recruiter Adriano Gatto. This timeless masterpiece features a time-honored recipe for hilarity: mistaken identity, wild mishaps and slapstick humor. Take two sets of identical twins (separated as children). Fold in a jealous wife, her charming sister and an amorous kitchen wench. Mix with a generous variety of eccentric characters. Let simmer for two hours, stirring constantly. Serve to those with an appetite for giggles, guffaws and belly laughs.

•And talk about ending the 50th anniversary season with a bang! From April 24 through May 4, Niagara University Theatre will present the award-winning John Kander, Fred Ebb and Rupert Holmes murder mystery musical "Curtains." Braddock will direct the production, while Vaughan is choreographer.

NU proudly rekindles its longtime relationship with the works of Kander and Ebb with this romantic, 1959-era spectacle - a bright, brassy homage to musical theater (with a twist). At the Boston opening of a new Broadway-bound musical, the leading lady mysteriously dies on stage. A local detective - a musical theater fan - endeavors to solve both the mystery and the show's problems, while simultaneously courting the ingénue.

"Curtains" was nominated for a Tony Award for Best Musical in 2007 and it won the Drama Desk Award for Outstanding Book of a Musical the same year.

•During the summer of 2014, NU Theatre will once again present free children's theatre for the community. The Niagara University Repertory Theatre troupe will present a rotating repertoire of children's stories during July and August. Suitable for children ages 3 through 10, N.U.R.T. will perform in the air-conditioned Leary Theatre, and in the Western New York community.

Locations, dates and times for performances will be announced in the spring.

"While many area theaters focus on producing one type of theater, here at NU, our season of theater is about variety and tremendous value," Braddock said. "With our $3.1 million renovation three years behind us, our first-class facility can offer audience amenities, which add to the entertainment experience: a circular driveway drop-off, a computerized box-office, an elevator, air-conditioning, listening devices, comfortable seats with arm and leg room, and an audience lounge for pre-show and intermission - complete with a photographic mural spotlighting NU Theatre productions from the 1960s through 2010. We invite theatergoers from across Western New York and Southern Ontario to join us for our 50th year of theater performances featuring theater majors from across the country. These students work under the direction of our award-winning faculty, comprised of a professional team of directors/actors, a choreographer, a stage combat expert, vocal instructors/musicians, a costume/make-up designer, a costume technologist and scenic and lighting designers."

For tickets, visit http://theatre.niagara.edu/; stop by the box office in the lobby of the Elizabeth Ann Clune Center for Theatre within Clet Hall (Monday-Friday 2:30-5:30 p.m. and one hour prior to curtain); call 716-286-8685 or email[email protected].

Additionally, any non-NU student, 21 and younger, with a current student ID card, may be admitted free of charge when there are seats available. Such tickets will be distributed five minutes prior to curtain. To guarantee tickets, purchase a discounted youth ticket.