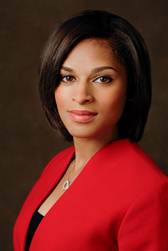 Jericka Duncan has been named a correspondent for news services at CBS News, the network's 24-hour television newsgathering service for CBS stations and broadcasters around the world. Her appointment is effective immediately.

Duncan joins CBS News from KYW-TV, the CBS owned and operated station in Philadelphia, where she had been a general assignment reporter since August 2010. While there, she earned a first-place award from the Associated Press and a local Emmy nomination for a series of reports about disabled adults held captive in a Social Security scam. In addition, the Philadelphia Association of Black Journalists named Duncan its "Journalist of the Year."

Duncan reported for KYW-TV as part of the CBS News Development Program, which is designed to create a pool of highly qualified producers and correspondents for the news division.

Duncan received a local Emmy Award in the "Best Morning Show" category for her winter storm coverage in 2008 and a New York State Broadcasters Association Award for "Best Spot News Coverage" in 2007.

Duncan was graduated from Ohio University in 2005 with a Bachelor of Arts degree in communications. She will be based in New York.