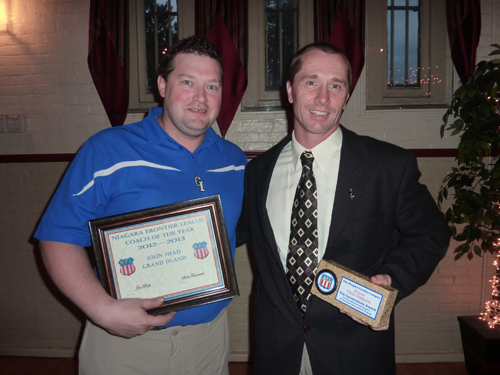 Two coaches at Grand Island High School were among those honored at the 76th annual Niagara Frontier League banquet, held June 12 at the Tonawanda Castle.

Head led the 2012 Vikings girls volleyball team to its most successful season in school history. The Vikings won the Niagara Frontier League championship with an undefeated 14-0 record in finished the season in the Section VI Class A finals.

According to the athletic department, in his 10-year career, Head has built the girls volleyball team into a top-10 Western New York program and a perennial NFL title contender.

"John's a student of the game, very intense but low key. He motivates his teams through his knowledge of the game and has the unique ability to make changes to his game plan and adjust to any situation during the game."

Simpson's award stated he came to Grand Island 13 years ago "and immediately made an impact on our student-athletes as a high school business education teacher and coach. Two years later, Chris took on the huge task as yearbook advisor, which started his relationship with the athletic department by taking individual and team photographs that would eventually fill the athletic hallways."

In making the award, the GI Athletic Department said: "Outside of his teaching profession, yearbook advisor and coaching positions, Chris has been the most reliable individual supporting the athletic department in every capacity needed. He has worked athletic events for all sports seasons, rain or shine, as a supervisor, security timer and scorekeeper. He continues to find time to do weight room intramurals, summer leagues, open gym for girls and boys, fundraising, after-school study session, and AAU basketball teams."