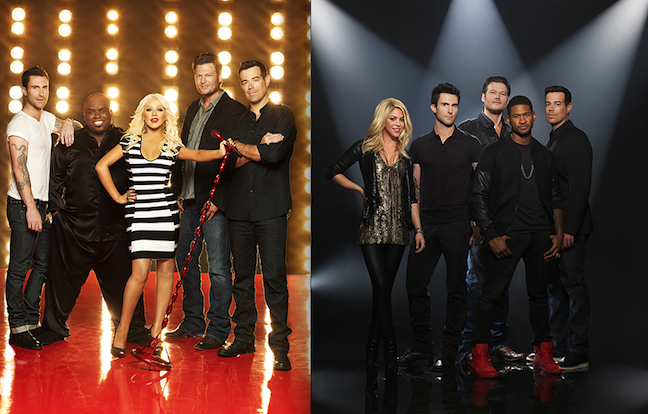 Illustrating the continuity between its original and current coaches lineup, "The Voice" will bring back Christina Aguilera, CeeLo Green, Adam Levine and Blake Shelton for its fifth cycle in fall and will pair Levine and Shelton with Shakira and Usher for the sixth cycle in midseason. Carson Daly will return as host for both cycles.

The announcement was made Friday Paul Telegdy, president of alternative and late night programming, NBC Entertainment.

"We locked in a plan several months ago to have the outstanding Christina Aguilera and CeeLo Green rejoin Blake and Adam for cycle 5, and we're pleased to announce that the original four coaches are going to be back together in the fall," he said. "They're the reason this show was launched so strong for the first three cycles and we owe them a debt of gratitude. And after careful consideration of everyone's schedules for next spring, we are excited to be returning the current cycle of judges — Shakira and Usher along with Blake and Adam — for cycle six, which will premiere after the Winter Olympics."

"We're very fortunate to have these six incredible artists to weave in and out of the show as their performing and recording schedules permit," said NBC Entertainment Chairman Robert Greenblatt. "The show has taken off largely due to the rapport and commitment of these great coaches, in addition to the expert hosting of Carson Daly."

"I am so thrilled that our 'Voice' family has grown from four coaches to six," said executive producer Mark Burnett. This show thrives on the ability of our coaches to continue to balance their enormous music careers with working on 'The Voice' to coach some of the best undiscovered talent in America. The coaching panel of Christina, CeeLo, Adam and Blake was at the heart of this show in its first three seasons, and we are so lucky to have found equal success with Shakira and Usher in season four. Our best seasons are ahead of us."

The current cycle of "The Voice" is averaging a 5.2 rating, 14 share in adults 18-49 and 14.5 million viewers overall on Monday nights, making it the season's No. 3 primetime series on ABC, CBS, NBC and Fox in adults 18-49, as well as the No. 2 entertainment series and the No. 1 reality series, according to "most current" results from Nielsen Media Research. The Tuesday edition is averaging a 4.7/14 in 18-49 and 13.4 million viewers overall, making it the No. 4 entertainment series on in 18-49. Every telecast of "The Voice" so far this cycle, excluding recap episodes, has won its time period in adults 18-49.

Shelton, Levine, Green and Aguilera were the coaches for the first three seasons of "The Voice," and helped establish the musical competition series as a dominant ratings force. Shakira and Usher have only built on that, continuing to make "The Voice" a Nielsen hit.

Shakira and Usher will reteam with Shelton and Levine in midseason. The show will receive plenty of promotional pop during NBC's coverage of the February Winter Olympics from Sochi, Russia.

"The Voice's" innovative format features four stages of competition: the first begins with the blind audition, then the "Battle Round," the brand new "Knockouts," and, finally, the live performance shows.

During the blind auditions, the decisions from the musician coaches are based solely on voice and not on looks. The coaches hear the artists perform, but they don't get to see them - thanks to rotating chairs. If a coach is impressed by the artist's voice, he/she pushes a button to select the artist for his/her team. At this point, the coach's chair will swivel so that he/she can face the artist he/she has selected. If more than one coach pushes their button, the power then shifts to the artist to choose which coach they want to work with. If no coach pushes his/her button, the artist is eliminated from the competition.

Once the teams are set, the battle is on. Coaches will dedicate themselves to developing their team of artists, giving them advice, and sharing the secrets of their success along with the help from their celebrity advisers. During the "Battle Rounds," the coaches will pit two of their own team members against each other to sing the same song together in front of a studio audience.

After the vocal battle, the coach must choose which of his/her singers will advance to the next round of competition, while the losing artist is available to be stolen by another coach. Each coach has two steals during the "Battle Rounds."

At the end of the battles, only the strongest members of each coach's roster remain and proceed to the "Knockouts." The artists will be paired again with a member of their team, but this time they find out only minutes before performing who they are being compared against. The artists each select their own song to perform individually, while their direct competitor watches and waits. They are vying for their coach's confidence and decision to take them to the live shows. Their coach will choose the winner and the artist not selected will be sent home.

In the final live performance phase of the competition, the top artists from each team will compete each week against each other during a live broadcast. The television audience will vote to save their favorite artists and the two artists with the lowest number of votes will be sent home each week. In the end, one will be named "The Voice" and will receive the grand prize of a recording contract.

Find more about "The Voice" on NBC.com's official show site: http://www.nbc.com/TheVoice. Fans can follow the show on Facebook at http://www.facebook.com/NBCTheVoice and on twitter at @NBCTheVoice and #TheVoice.