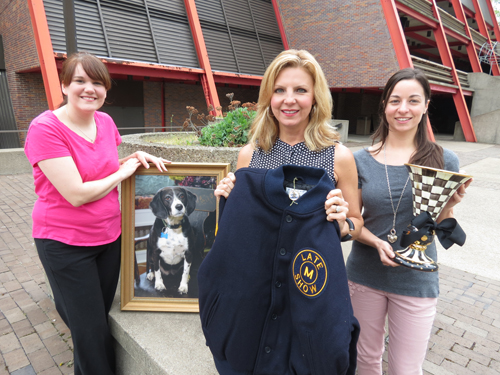 Pictured from left, Artpark's Katie Miller and Maria Costello Hays join gala chairwoman Laurie Lisowski Frey (center) in displaying some of the items guests can bid on as part of a special auction.

As part of its 40th anniversary gala, Artpark & Company will hold an auction filled with prizes guests are highly unlikely to find elsewhere.

Some of the unusual and enticing auction items include:

•Tickets to the ABC program "LIVE with Kelly and Michael."

•Tickets to the CBS program "The Late Show with David Letterman," along with a "Late Show" jacket.

•A photography session with your child or pet.

•A DiMino Tops Lewiston shopping spree with "Iron Chef" Geoffrey Zakarian. The "Chopped" judge will show the winner how to pick the best produce, meats and how to stock a pantry.

•A gift certificate to a celebrity hair salon - Frederic Fekkai in New York or Los Angeles.

•Club seats to a Buffalo Bills game with on-field passes.

•Tickets to the Country Music Awards in Nashville, Tenn.

•Tickets to the Emmy Awards in Los Angeles.

•Trips to Sonoma Wine Country and a ski trip to Whistler, B.C.

•Precious and semi-precious stones, including a ruby (as it's Artpark's 40th anniversary).

Of course the action also has overnight stays, and gift certificates to top local restaurants and attractions up for bid, too.

Famed singer Frankie Scinta, who just signed with the "D" Casino in Las Vegas, will perform at the anniversary gala with an orchestra. His music will consist of all the genres that influenced him as he grew up.

"I can't wait to perform at Artpark!" Scinta said.

Joining Scinta on stage will be Buffalo native Ashlee Amoia.

The Bobby Militello Quartet will entertain the crowd during cocktails and the silent auction.

The entire gala event will take place on June 1 at Artpark, in the upper amphitheater, under an elegant tent. It includes hors d'oeuvres and dinner.

Organizers expect the remaining tickets to be sold soon. Seats are on sale until May 15. To order, call Artpark at 716-754-4375 or visit www.artpark.net.