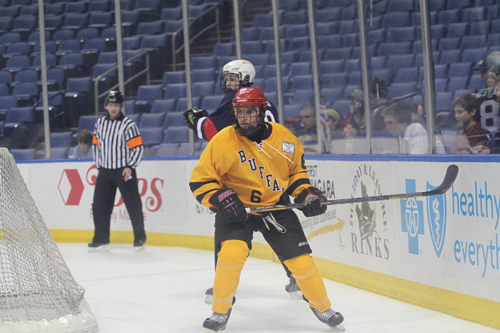 Niagara-Wheatfield hockey player Matt Peters (No. 6) was selected to play for the Buffalo Seniors All-Stars in the 2013 Bowman Cup. The Bowman Cup is a showcase hockey tournament held each year featuring the top high school junior and senior players from Buffalo and Rochester. In this year's tournament, held Monday, April 15, at the First Niagara Center, the Buffalo Seniors beat Rochester 9-0. In the Junior game, it was Rochester over Buffalo 4-1, and in the Prep School Division it was 3-2 in Buffalo's favor. (photo by Janet Schultz)