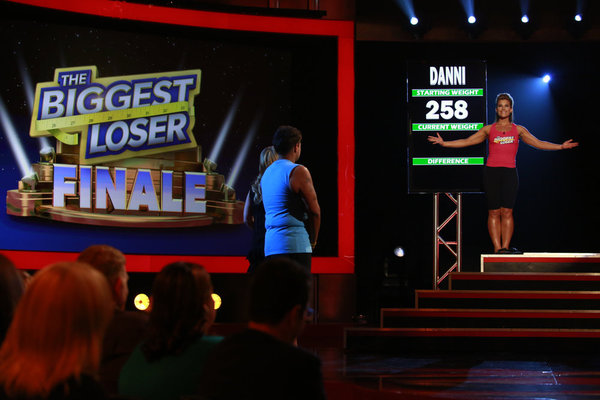 Danni Allen, a 26-year-old advertising account coordinator from Wheeling, Ill., became "The Biggest Loser" at Monday night's live season 14 finale of the NBC series, winning $250,000. Danni began the season weighing 258 lbs. and lost 121 lbs. She weighed in at finale at 137 lbs., and lost 46.90 percent of her body weight. Danni was the last remaining contestant on trainer Jillian Michaels' white team.

The runner-up among the three finalists was 25-year-old pharmaceutical representative Jeff Nichols, who began the show weighing 388 lbs., and ended at 207 lbs. He lost 181 lbs., and 46.65 percent of his body weight. America voted between Joe Ostaszewski (Williston, Fla.) and Jackson Carter (Layton, Utah) to determine who would be the third finalist, and Carter won and came in third place. Jackson, 22, is the show's first openly gay contestant and works as a volunteer coordinator for an LGBT resource center and movie theater assistant manager. He started the sow at 328 lbs., and ended at 190 lbs., losing 138 lbs., and 42.07 percent of his body weight.