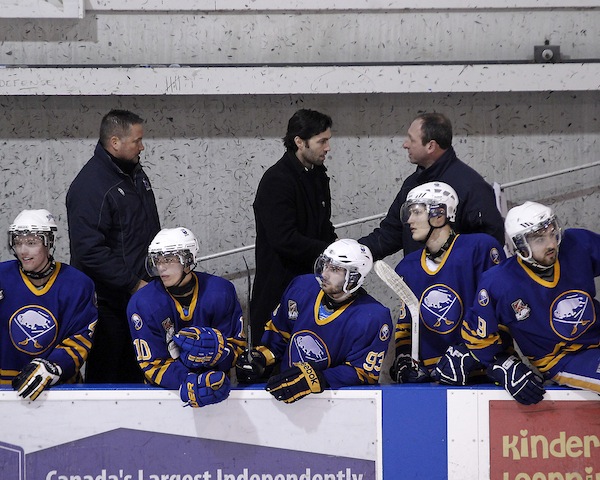 Michael Peca (center) behind the bench in the OJHL.

The Ontario Junior Hockey League has announced that Michael Peca of the Buffalo Jr. Sabres was named the recipient of the 2012-13 OJHL Coach of the Year Award.

After originally joining the Jr. Sabres as general manager prior to the 2011-12 season, Peca took over the role as head coach. He replaced Grant Ledyard in early January and led the club to its best finish since the Niagara Scenic finished in second place in the Metro Junior 'A' Hockey League's West Division in 1995-96.

With higher expectations, Peca improved upon last season's record in 2012-13 as Buffalo captured the South-West Conference regular season title on the strength of a 38-12-5 record (good for 81 points and a .736 winning percentage, the best in franchise history since jumping to the Metro League in 1995-96 from the Eastern Junior Hockey League). Buffalo would also finish as runner-up for the OJHL regular season title, finishing four points behind the Trenton Golden Hawks for first place in the overall standings. A testament to the club's leadership, the Sabres would tie for the league lead with 19 road wins

Known as a defensive specialist during his 14-year NHL career, twice winning the Selke Trophy as Best Defensive Forward, Peca's influence on the Jr. Sabres was evident as they had the league's top penalty kill at 89.92 percent, while also recording 14 shorthanded goals, also tops in the OJHL.

Led by OJHL top scorer Tyler Gjurich, and January South-West Conference Player of the Month Ryan Schmelzer, the Sabres were also one of the top offensive forces in the OJHL, recording 249 goals for, more than any other OJHL squad, and the most by the franchise since 1995-96 when it was led by Jeff Farkas. The club's power play would enter the playoffs ranked fourth in the league on the strength of 65 power play goals in 309 man advantages for a 21.04 percent success rate.

A 38-year old native of Toronto, Peca played four seasons in the OHL with the Sudbury Wolves and Ottawa 67's, while also winning the gold medal with Team Canada at the 1994 World Junior Championship held in Ostrava, Czech Republic. After being drafted by the Vancouver Canucks in the second round, 40th overall, of the 1992 NHL Entry Draft, Peca embarked upon a 14-year NHL career with stops in Vancouver, Buffalo, New York Islanders, Edmonton, Toronto and Columbus. He was captain of the Buffalo Sabres and also a member of Team Canada at the 2002 Winter Olympic Games held in Salt Lake City, Utah. At the Olympics, he helped to end Canada's 50-year gold medal drought when it defeated the U.S. 5-2 in the gold medal game.

The OJHL Coach of the Year Award is awarded to the head coach who is adjudged to have contributed the most to his club's success throughout the course of the regular season.