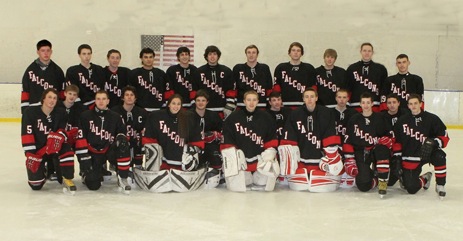 The team, which defeated Ithaca in the New York State Public High School Athletic Association quarterfinals last weekend, will take on Saratoga on Saturday in Utica. If they win there, they would go on to the state finals on Sunday.

N-W has not had a team win a state championship since the girls bowling team in 1997, according to Mark DiFilippo, N-W director of health, physical education and athletics.

The high school team is only in its fifth year. The Falcons made it to the state semifinals in its first year, but lost 7-3 against Mamaronek.

Coach Rick Wrazin, who also teaches physical education at N-W, said his team of 24 boys and one girl is ready to take on Saratoga.

"I've seen film of them. They're a good team, but I think if we come and play our game we stand a pretty good chance," Wrazin said.

The team has only seven seniors this year, but has 15 new players, due to a larger loss of graduates from last season.

"The guys that were here last year kind of knew what it takes to have a successful season. The new guys came in and they followed our leadership," Wrazin said.

"Probably more than everything, it was hard work," he said of this year's success. "We preached to them about all the little things that kind of go unnoticed during the game, but make the difference in the end."

Captains of the team are defensemen Matt Peters and Jeff Janese, both seniors, and junior forward Anthony Vekich.

Peters said the team seems relaxed and ready to go. They'll just be doing what they've done all year together, he said.

"We've become very close as a group ... kind of like a family. Everyone has got each other's backs."

They're excited, of course.

"I think it's pretty good for our school. We have the opportunity to win it all," Peters said. "It's a fun experience. It's something you'll never forget."