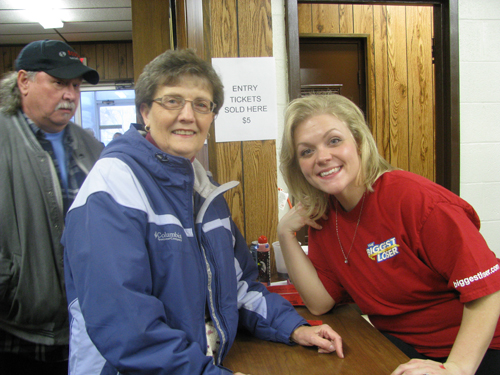 Wheatfield's St. Johnsburg Volunteer Fire Co. was bustling with activity on Saturday as the community responded to help one of their own.

Dawn Daigler, 37, had an accident in May that left her with a long-term spinal cord injury. She needs around-the-clock care and medical insurance has run out.

The benefit for Daigler had something for everyone, ranging from a basket auction to barbecued chicken to a visit by a "Biggest Loser."

Pam Gaydos of Wheatfield said she didn't know the Daigler family, but saw the announcement of the benefit in the Tribune and decided to come and offer her support. Her son was in line to collect some balloon art from two Clown Alley clowns.

"My mother is out there line dancing," she added, pointing to the other room where a country band kept toes tapping.

That's Jacob Gaydos with BoGo the clown (Lana Thomas of Getzville), left, and Mrs. Busy B (Carol Barber from Sanborn) in photo No. 2.

The event also drew support from Wheatfield Town Hall, where town employees donated two big baskets and turned out to offer their support along with some councilmen and their wives. Don Profrock from the town's Planning Board was tending bar.

That's Wheatfield Deputy Town Clerk Nancy Rosie in the third photo checking out some of the more than 350 baskets offered in the auction.

Nancy Major of Wheatfield was startled to find she was buying her entry/basket auction ticket from Cate Laughlin, the Ransomville student now known across the country due to her appearance on NBC's "The Biggest Loser." That's Major and Laughlin in the first photo.

Major wanted to know how much weight Laughlin had lost and how she had won the chance to be on the show.

Laughlin, who was eliminated in January, had started the show at 237 pounds and is down to 176 pounds, a loss of 61 pounds, she said. However, her actual loss is 91 pounds, because she had taken off 30 pounds in the year before being chosen for "Biggest Loser," then plateaued, "and kind of lost my inspiration."

Laughlin applied for "The Biggest Loser" on the NBC website, was invited to audition either by video or live, and decided to drive to Detroit for a live audition, she said.

"Dawn's a very good friend of mine. I want to help in any way I can," she said, explaining her appearance at the benefit. The two became close after Daigler supported a cancer research fundraiser that Laughlin sponsored.

Daigler, a country music lover and line dancer, graduated in 1993 from Niagara-Wheatfield High School, attended Niagara County Community College and is a member of the Fraternal Order of Eagles.