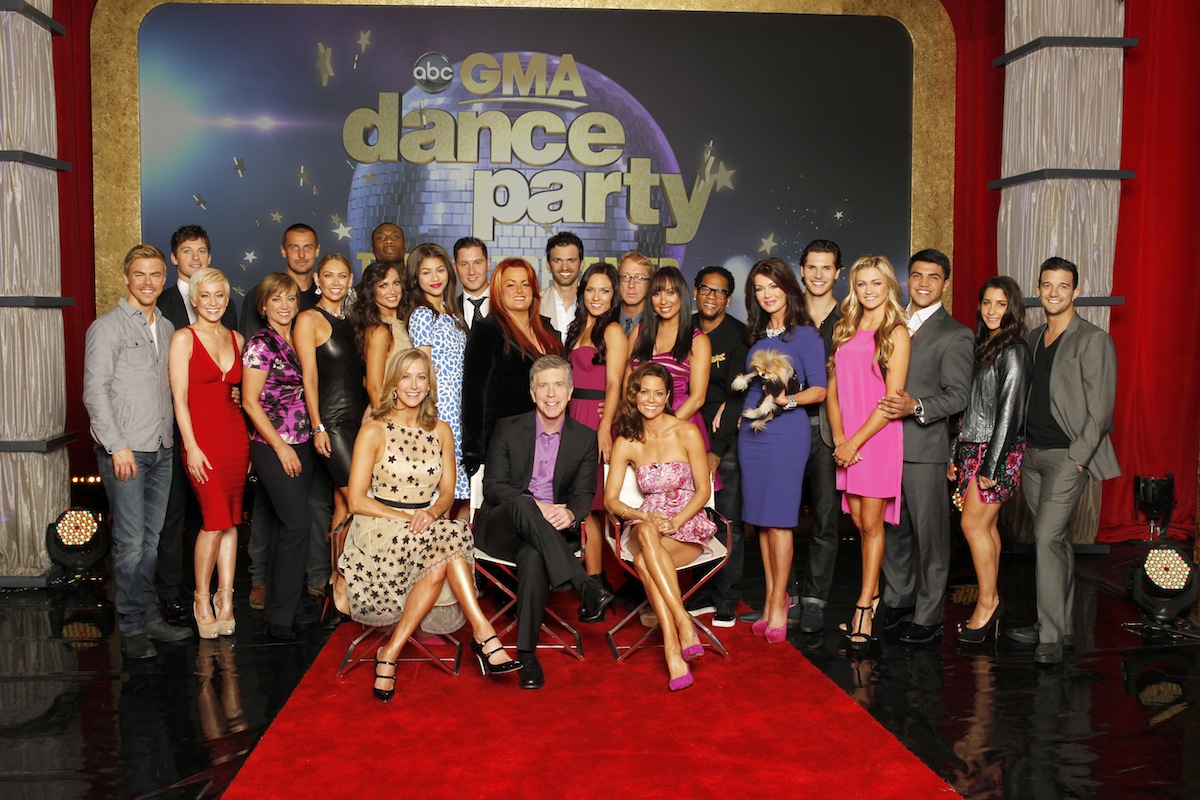 The stellar new cast will take to the stage when "Dancing with the Stars" premieres, Monday, March 18, on ABC

"Dancing with the Stars the Results Show" premieres in week two, with the first elimination, Tuesday, March 26

This season's dynamic lineup of stars - including a country music legend, a figure skating champion, a boxing dynamo, an Olympic gold medalist and the youngest contestant to ever compete on the show - will perform for the first time on live national television with their professional partners during the two-hour season premiere of "Dancing with the Stars," Monday, March 18 (8-10:01 p.m.) on the ABC Television Network.

As announced Tuesday morning on ABC's "Good Morning America" by "Dancing with the Stars" hosts Tom Bergeron and Brooke Burke-Charvet, the 11 celebrities, with their professional partners, heading to the dance floor this season (in alphabetical order) are:

ZENDAYA COLEMAN - Multi-talented actress and singer Zendaya Coleman stars as Raquel "Rocky" Blue, one half of the comedic duo in the hit Disney Channel series "Shake It Up!," and is currently recording her debut album on Hollywood Records. She partners with VAL CHMERKOVSKIY.

ANDY DICK - Andy Dick is an American comedian, actor, writer, director, musician and producer. His first regular television role was on the short-lived but influential "Ben Stiller Show." Dick was a mainstay on network television from 1995-2006 on NBC's "NewsRadio" and ABC's "Less Than Perfect." In 2001 he wrote, directed, produced and starred in "The Andy Dick Show" for MTV. He joins first-time professional partner SHARNA BURGESS.

DOROTHY HAMILL - Dorothy Hamill captured the gold medal at the 1976 Winter Games in Innsbruck, Austria, at the age of 19. Overnight she became one of those rare champions who transcends her sport and captures the country's imagination. Still, she has said she is most proud of her World Championship title in Gothenburg, Sweden, which followed her Olympic win; at the time, everyone advised her to retire from amateur competition, saying that even a second-place finish would tarnish the luster of her Olympic Gold. She partners with TRISTAN MacMANUS.

D.L. HUGHLEY -D.L Hughley,one of the most popular and highly recognized standup comedians on the road today, has also made quite an impression in the television, film and radio arenas. First and foremost a standup comedian, his fifth standup special, "Reset," premiered on SHOWTIME in 2012 and is currently available on DVD. He was both star and producer of his namesake television show that ran on ABC and UPN, "The Hughleys." One of the standout comedians of the hit comedy docu-film "The Original Kings of Comedy" and a veteran of numerous talk show appearances, Hughley switched the tables in 2005, hosting his own talk show, "Weekends at the DL," on Comedy Central. He partners with CHERYL BURKE.

JACOBY JONES - Jacoby Jones is a professional football player for the Baltimore Ravens, the 2013 Super Bowl Champions. He began his professional career after being drafted by the Houston Texans in 2009 and was signed by the Baltimore Ravens in 2012. Career highlights include matching an NFL record with a 108-yard kickoff return for a touchdown. He partners with KARINA SMIRNOFF.

WYNONNA JUDD -Five-time Grammy winner and New York Times bestselling author Wynonna Judd has always revolved her career around telling stories. Whether performing alongside her mother as one half of the legendary duo The Judds or pushing the boundaries on her own mega-successful solo path, Judd's ability to reach the heart of the human spirit through her bold and unflinching honesty is the entertainer's true gift. She partners with TONY DOVOLANI.

VICTOR ORTIZ - Victor Ortiz is a living, breathing example of the American dream. From a broken home in a small town in Kansas to the bright lights of the boxing ring, Ortiz has used every obstacle he has encountered along his journey to fuel his strength and attain his dreams. As former welterweight boxing champion, Ortiz finally found his life's calling as a world class athlete. He partners with newcomer LINDSAY ARNOLD.

KELLIE PICKLER -Kellie Pickler grew up immersed in country music in the small town of Albemarle, N.C., with the words of Tammy Wynette, Patsy Cline, Loretta Lynn and Dolly Parton shaping her musical footing. At the age of 19 she gained fame as a contestant on the fifth season of "American Idol," and in 2006 signed to 19 Recordings/BNA Records to release her debut, "Small Town Girl," which went on to sell more than 800,000 copies and produce three singles: "Red High Heels," "I Wonder" and "Things That Never Cross a Man's Mind." In 2008 Pickler released her self-titled sophomore record featuring hits "Don't You Know You're Beautiful," "Best Days of Your Life" (co-written with Taylor Swift and her first Top 10) and "Didn't You Know How Much I Loved You." She partners with DEREK HOUGH.

INGO RADEMACHER - Soap Opera star Ingo Rademacher is best known to audiences as the charismatic Jasper "Jax" Jacks on ABC's "General Hospital." Rademacher originated the role of "Jax," having first aired on "General Hospital" in January of 1996. His other television credits include "Hawaii Five-O," "Titans," "Veronica's Closet" and "According to Jim." He partners with KYM JOHNSON.

ALEXANDRA RAISMAN - Just 18 years old, Alexandra Raisman captained the U.S. Women's Gymnastics Team to its first team gold medal since the 1996 Olympic Games. She added the U.S.' first ever gold medal in the floor exercise and also won a bronze on the balance beam, making her the most decorated American gymnast in London. She partners with MARK BALLAS.

LISA VANDERPUMP -Hailing from London, restaurateur, designer, author, philanthropist, producer and television personality Lisa Vanderpump moved to the U.S. eight years ago. Vanderpump is best known for "The Real Housewives of Beverly Hills," which she joined in 2010. In 2013 Bravo launched her reality television show, "Vanderpump Rules," exploring the intricacies of owning SUR, a sexy, unique restaurant in West Hollywood. She partners with newcomer GLEB SAVCHENKO.

"Dancing with the Stars" and "Dancing with the Stars: the Results Show" returns this season with new surprises and all the performance elements viewers have come to know and love. "Macy's Stars of Dance," featuring some of the best choreographers and performers from the different styles of dance who offer viewers performances that represent the pinnacle of achievement in their genres, will return.

The show also welcomes the return of the "AT&T Spotlight Performance," which features and celebrates people whose lives have been changed forever by dance. AT&T is also helping the search to find these performers by allowing fans to nominate potential dancers.

Viewers may cast their votes for their favorite teams via phone on Monday night during and up to 60 minutes after the "Dancing with the Stars" performance shows. AT&T customers may also vote by texting the word "VOTE" and entering the number that corresponds to the team they want to support (message and data rates may apply). Online voting at www.ABC.com is open from the start of each episode on the East Coast and closes at 11:00 a.m. ET on Tuesdays. Additionally, fans can again vote on Facebook www.facebook.com/dancingwiththestars. A custom Facebook app sponsored by AT&T will let fans vote, share who they voted for and why, as well as see who friends voted for. They can also access the "Dancing with the Stars" Social Scene page, and the "AT&T Spotlight Performance" and "Casting Call" from the app.