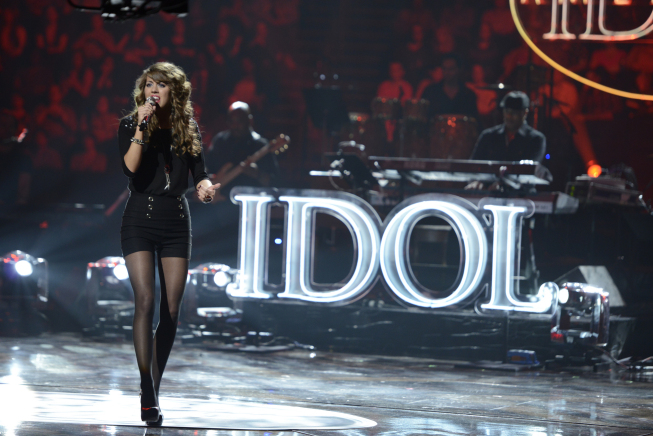 "American Idol": Angela Miller performs in the "Sudden Death Round" on Wednesday on FOX. (photo by Michael Becker/FOX. Copyright FOX.)

Wednesday from Las Vegas, the first "American Idol" group of girl semifinalists performed on the stage of Cirque du Soleil's Beatles LOVE Theatre at The Mirage. After another round of intense deliberations, judges Mariah Carey, Randy Jackson, Nicki Minaj and Keith Urban announced the first five semifinalists who have secured a coveted spot in this season's Top 20. The five semifinalists are Kree Harrison, 22, from Nashville; Amber Holcomb, 18, from Houston; Adriana Latonio, 17, from Anchorage; Angela Miller, 18, from Beverly, Mass.; and Tenna Torres, 28, from Queens.

Next week on Wednesday, Feb. 27 (8 p.m.), and Thursday, Feb. 28 (8 p.m.), another 10 semifinalists will perform each night - girls on Wednesday and guys on Thursday. Each night, the judges once again will face the tough decision of choosing which five will stay and which five will be sent home. At the end of the first "Sudden Death Rounds" of the semifinals, only the Top 20 will remain.

Visit www.americanidol.com for interviews with the Top 40, as well as additional "American Idol" news.