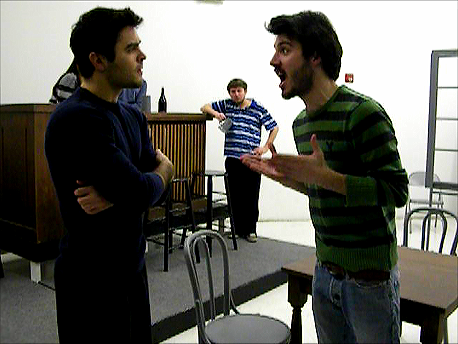 The NU Theatre Department and the Castellani Art Museum present, "Picasso at the Lapin Agile" written by Steve Martin and directed by Adriano Gatto.

The NU Theatre Department and the Castellani Art Museum present "Picasso at the Lapin Agile," originally written by Steve Martin and directed at NU by Adriano Gatto. The play goes back in time to see what would happen if Pablo Picasso and Albert Einstein had actually met and shared ideas. The show takes on a comic approach to show how art and science come together. The audience should expect this show to be filled with "food for thought" and unanswered questions as Picasso and Einstein discuss their intentions.

The brilliant Picasso is played by Alan Trinca, who describes Picasso by saying, "He's a heartbreaker and typically doesn't think before he acts. He has an air of confidence that supersedes the rest of the characters and has to be the best."

"He looks to see the world in a fresher way," Sheridan said. "He shares qualities with Picasso, but is more willing to admit that he's wrong."

The stubborn-yet-strong barmaid Germaine is played by Stephanie Valliere.

"Germaine is more street-smart than book-smart," Valliere said. "She wants more out of her experience as a woman, and is ahead of her time with some of her ideas."

The characters all have something in common: they want something more out of life. This makes for a thoughtful and entertaining show.

"Picasso at the Lapin Agile" will be staged in the Castellani Art Museum, instead of the usual location of the Leary Theater, so as to set the atmosphere for where Einstein and Picasso meet prior to the major breakthrough in their careers. The bar, the Lapin Agile or "Nimble Rabbit," actually existed and had works of art on the walls, so the art museum makes for a great setting.

The show runs Feb. 14-17. For times and ticket information, call the Niagara University Theatre Box Office at 716-285-8685 or visit http://theatre.niagara.edu/boxoffice/.