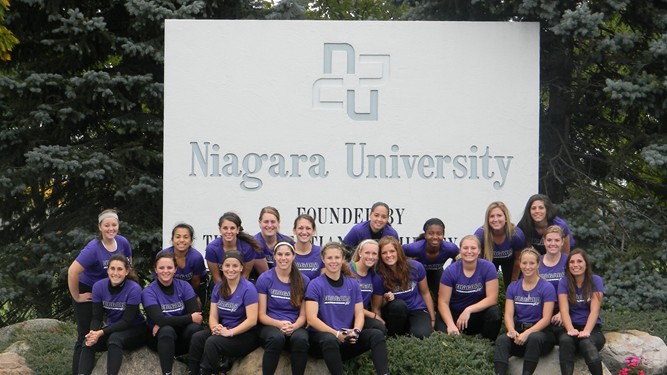 To those who say you can't come home again, Niagara University's new softball coach, Ellie Chan, would disagree. The Western New York native and Canisius College grad (we won't hold that against her), has been working her way up the coaching ranks since the day she left college. All that time and hard work has paid off with her returning home for her first Division 1 coaching job.

"I've worked my way up the ladder. I did junior college, D3 and D2. It's been fun and all, but I just feel like I need to be at this level (D1). I played D1. It's been great, it's been exciting and just to be back home around my family has been awesome too," Chan said.

Chan has won at every level and she sees no reason why she can't on Monteagle Ridge. "I think they're really committed, they're really dedicated. They want to win. I think we're in that good position right now to teach them how to win. We need to bring that winning back."

She sees no problems with recruiting quality student-athletes to come play softball in the unpredictable weather of Western New York. "Being from here, I know what it is like. It's been nice in the south," she said.

"The Carolinas were nice. You still get the four seasons, but winter is one month long and that was it. I think coming back here you just have to embrace the weather. This morning as a matter of fact, I came in for an early meeting with my coaching staff and it was just a beautiful morning. I think you just have to appreciate those little things in life. I mean, it was beautiful snow covering everything. The sky was breaking, it was blue and yellow and the sun was peeking through. If you embrace it, you're fine with it. That is basically what we tell our kids that are coming in," Chan went on to say.

Chan played a certain way on the field and she knows what kind of players she wants wearing purple. "They need to be committed," she said. "I get along very well with people that are committed. That's in every aspect of my life. If you're going to commit to something, commit to it 100 percent ... work ethic is obviously very important. As a coaching staff, we're going to bust our butts for these kids. We will rack our brains, we will bust our butts for them and we expect them to do the same. Just give us an honest effort."

Her players also might want to check whatever baggage they have at the door, because she is going to have none of it. "They need to have that competitive edge. They need to want to win. They need to be most focused on the team and what we can do together ... not the individual player who doesn't mind losing as long as she is in the spotlight. It's about the team and it's about finding a way to win."

She may have graduated from Canisius, but that is long in her past. "It's a great rivalry as it is," Chan said. "I think this adds a little extra flair to it, which is cool. I take some heat from people, but right now in life, this is my number one focus when it comes to softball. But I bleed purple now and that's what I tell everybody."

Ellie Chan was a winner as a player and a coach at her previous stops. Now she plans to win here at Niagara and she wants everyone to come see it happen. "Come on out," she said. "It is going to be exciting; it is going to be fresh. I love our fans. We had a packed house in the fall when we played and it wasn't even our real season. What I love about the atmosphere at Niagara, you will see people lined up all the way up and down the fences. That's different and I love that because people are right there, like they are involved in the game. It is totally awesome and I love the environment we have here ... if they don't know we're going to be playing that day, they will know with all the noise we're going to be making."

Picked sixth in the MAAC pre-season poll, the softball team begins its season on Feb. 22 with a tournament in Chattanooga, Tenn. The team begins playing at home on April 3 with a double-header against the University at Buffalo.