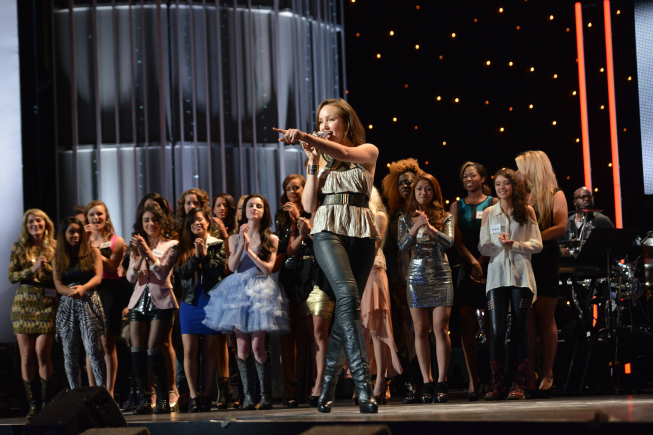 "American Idol": Drama and desperation escalate behind the scenes as the pressure mounts during the intense "Hollywood Rounds" on FOX. (photo ©2013 Fox Broadcasting Co./credit Michael Becker/FOX)

Whether auditioners received a unanimous "yes" from Mariah, Randy, Nicki and Keith or had the judges battling over their fates, it's a clean slate in Hollywood for the lucky contestants who are one step closer to becoming the next "American Idol." For the first time in the "Hollywood Rounds," it's guys vs. guys and girls vs. girls, as they compete for a spot in the coveted Top 40 semifinalists.

The "Hollywood Rounds" will be the toughest audition yet, but for some contestants, it will be a life-changing opportunity; for others, the end of the road. First, they will face the judges and sing a-cappella, trusting only in their talent to make it another day. Those that survive will then join forces with one another - trusting in friends and, possibly, foes - for the heart-pounding, sleep-deprived group day. Those who stand out will move on to the solo day, giving the remaining contestants one more chance to impress the judges and make the Top 40.

Drama and desperation escalate behind the scenes as the pressure mounts during the intense "Hollywood Rounds" which kick-off with the guys, competing on Wednesday, Feb. 6 (8 p.m.), and Thursday, Feb. 7 (8 p.m.). The girls get their chance to win over the judges beginning Wednesday, Feb. 13 (8 p.m.). At the end of the girls' second and final "Hollywood Round," on Thursday, Feb. 14 (8 p.m.), only the Top 40 semifinalists - 20 guys and 20 girls - will remain.

Interviews with all of the contestants are available at www.americanidol.com.