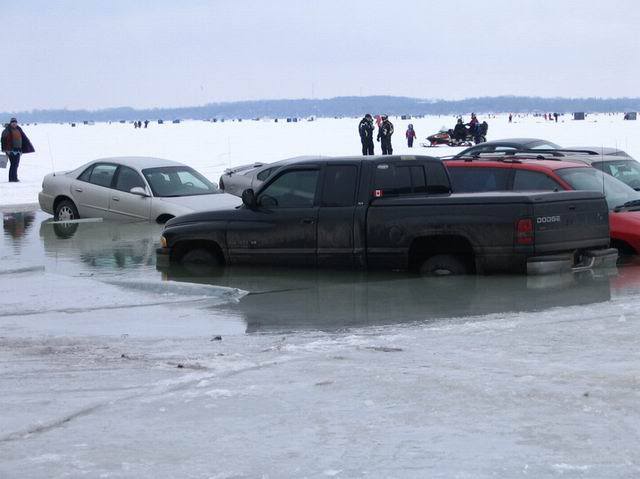 OK, let me tell you a little story.

Ice fishing is a great sport, fun, and a real challenge sometimes. A friend, John Eddy, who is a fishing buff and is well versed when fishing in any weather, any time of year, anyplace, sent me an email about an incident that happened on the southern end of Lake Simcoe in the Town of Gilford, Ontario, on Cooks Bay.

The incident was reported on local radio and TV, plus a video of the rescue hit the Internet almost instantly. Eddy sent me a link to the video so I could see the rescue. I think the video was done on a cell phone, because it wasn't too clear, plus at 5:30 p.m., it wasn't too bright on Jan. 12. I went back the next day to see the video again and, for some reason, it was gone or moved, otherwise I would have posted the link for everyone to see. Bays and creeks will always freeze before the open waters of a lake. Lake Simcoe had, and still has, open water as of this writing. It's just a matter of time before we hear some Lake Erie rescue stories.

Apparently, four ice fishermen went out together onto the bay ice, not paying attention to a January thaw, and not seeing anyone else out that day. It didn't matter to them, they went out anyway. If you remember temperatures were pushing into the 60s and days before that, the temps were well above freezing. Slush lay on top of the ice in spots, but all four of these guys must have thought they were the bravest and smartest fishermen on the continent. They weren't. They were all in relatively the same spot on the ice when it gave way under their combined weight.

The report was there was only 2 to 4 inches of ice to stand on, about 1/2 mile out. The experts agree that 4 inches is pretty safe for foot travel only. For vehicles, cars or pickup trucks, 8 to 12 inches is good, but never trust ice. It can be thick here, and a few feet away it could be unsafe, especially if there is water flowing beneath. Even when these four men went out, they had to walk across pack ice along the shore and that should have been a signal.

Before they broke through the ice, they spotted two other people go through the ice a short distance off and called 911. When rescue approached the two others, one of the four men, who happened to weigh in at 280 pounds, broke through the ice and couldn't climb out. As he grabbed the edge of the ice to get out, the edges kept breaking off as his buddies were frantically trying to save him. They got the attention of the rescue party that came out for the other two fishermen, and they all got a ride back to shore. The rescue team had a helicopter, snowmobile and an air powered boat. The boat did the job. About eight or 10 police cars also showed up for traffic control.

One wonderful thing these fishermen did do, they had survival (flotation) suits on, except for the single guy that fell through the ice. He was treated for hypothermia and was OK. What a blessing. In the time they waited for help, they would have been dead due to hypothermia if it wasn't for the suits. The survival suit is a suit like most Niagara River winter boaters use that is modeled after survival suits used on the Alaskan oil derricks or oilmen and fishermen in the North Seas. These suits aren't cheap, but they are your best line of defense if you ever have an accident in frigid waters, plus they will keep you toasty warm while fishing.

If you are not familiar, a new DEC boating law requires everyone on board to wear a life jacket from Nov. 1 to May 1. A life jacket won't keep you warm if you tip over and fall in, but at least they will be able to find your body easier with the bright colors you will have on. Your best bet when ice fishing, or boating, use the survival suit, then you will be able to take a kid or an elderly person fishing this time of year.

Randy Metzger of the Wilson Conservation Club told me he was out scouting the local waters last Friday, and in Wilson Harbor there were many ice fishermen out testing the ice. He thought they were all crazy, because at the ramp and along shore, the ice had separated along the edges. The rest of the ice appeared thin because the guys that were drilling holes with their ice augers took two or three turns on it, and they were through the ice already.

I told him "You can't fix stupid." Why people do things like that I'll never figure out, plus you are risking other people's lives by attempting to rescue you.

A close departed friend of mine, Joe Ognibene, coined the quote, "Ice testers are found in the spring." How true that is!

Some years back, when ice fishing on Lake Erie near Long Point, Ontario, four of us rented a hut and got a ride out to it by the hut operator in his heated Bombardier. It was a mild, January thaw type day, but lots of ice. Several fishermen parked their cars facing a fishing pier there. The ice was soft along the edges, and the hut operator commented on the ride out, "I keep telling those guys, don't park your vehicle there, the ice is not good." It looked good to the eye to me in the early morning, but when we came in off the ice about 3 p.m. the operator was right. There were six or eight cars that broke through the ice. The front ends all dropped through and all had to be towed out.

As that saying goes, you can't fix stupid. Well, I guess I had better join the crowd. When we all changed into our lighter clothes for the ride back home, we chitchatted for a while, and when we went to leave, my car wouldn't start. First, I thought "Oh no, here I am in a foreign country and my car won't start." But as soon as that thought hit me, I realized why it wouldn't start. 'Stupid' left his headlights on all day, that's why the battery was dead. To get there, we drove in the dark, when we got there, it was breaking daylight, and I never realized the lights were on. Another fisherman had jumper cables and helped us out. That finished a good day fishing, but I still felt stupid!

Next week I'll bring you a story about fishing with Jesse Owens. No kidding.

In the meantime, check out the ice fishing pages on www.OutdoorsNiagara.com, where you will find ice fishing hints, hut operators you can contact, a color copy of the safe ice thickness chart you can print, and tips on how Dave Genz, the grandfather of ice fishing, is so successful. You will also find out how to make yourself a rescue tool you can carry in your pocket. That 280-pound man could have used one of these.