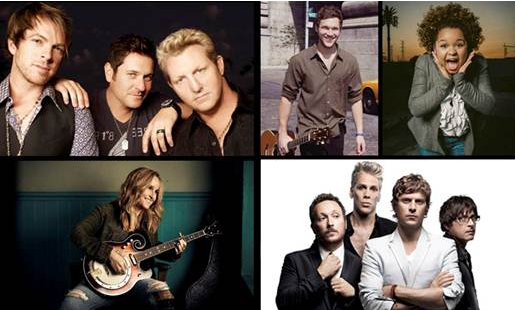 "A Home for the Holidays with Rascal Flatts." (CBS photo)

14th annual 'A Home for the Holidays with Rascal Flatts' airs Dec. 19 on CBS

The 14th annual "A Home for the Holidays with Rascal Flatts," an entertainment special to be broadcast Wednesday, Dec. 19 (8 p.m.), on the CBS Television Network, will be hosted by best-selling country vocal group Rascal Flatts. It will include moving performances by the band, as well as Rachel Crow (whose performance accompanies her personal story about foster care adoption), Melissa Etheridge, Matchbox Twenty and Phillip Phillips. Wayne Brady, Kevin Frazier and Jillian Michaels are set to present.

Following the success of the past 13 annual shows, the special continues to tell touching stories about adoption from foster care to raise awareness for this important social issue. The inspirational stories of these American families are enhanced with performances by some of today's most popular artists.

Some of the musical performances accompany story segments that are introduced by celebrities who have their own adoption experiences or are involved with children's issues. The stories highlight exceptional American children and families involved in this rewarding process.

"Everything I've done has been possible because of my family. They gave me the love and support to follow my dreams," said 14-year-old recording artist and "The X Factor" finalist Rachel Crow. Placed in foster care as an infant, she moved through three different foster homes in less than a year and faced an uncertain future until Kelly and Barbara Crow adopted her.

"Even as a toddler, Rachel had such spirit and drive to be the child she was meant to be, and before we knew it she became this little girl with the big voice," Barbara said. Three years later, the Crows adopted their second daughter, Hannah.

"The love I have for my girls is beyond anything," Kelly added.

Today, 11-year-old Hannah is a straight-A student and Rachel has a recording contract with Columbia Records/SYCO, a development deal with Nickelodeon and a recurring role on the comedy series "Fred: The Show."

If you met the Dunne brothers today you would never know they had been living apart, as they moved through 23 different foster homes in just five years.

"Some nights I would try to hide under the covers because I was so scared," said the youngest, John.

Chris and Tammy Dunne had raised two daughters when they saw a picture of the four brothers in foster care.

"My husband was adopted as an infant and I aged out of foster care without a family, so the boys really touched our hearts," Tammy said.

"We wanted them to stay together, and made an instant decision to adopt all four," Chris said.

"You can't think that no one will love you. There is someone and you just have to keep hoping," said oldest brother Eric.

"We met our son when he came to stay as a temporary foster placement. It started out as two days and turned into forever."

The Burketts always had a love for children and decided to become foster parents in 2009.

"We wanted to bridge the gap between the uncertainty of a foster child's past and the hope for an adoptive family in their future."

But fate had other plans.

"The day after we met Anthony, we took him to his high school track meet and he politely said, 'I'll call you when I'm done.' It broke my heart that he didn't think we would cheer him on," Tahnesia said.

"He had this shy smile of amazement when he realized we were there to watch him run and, from that day on, we had a special bond," Brett said.

Now a star athlete, Anthony thrived in the care of his loving parents, and when the Burketts learned that Anthony had a sister in foster care, they adopted both children.

When Terri and John Moore married in 1988, they thought about having biological children, but instead decided to adopt.

"We were very involved in our church and wanted to make a difference. Foster children need someone to champion them, and we knew we could give them the love they deserve."

The couple soon met 5-year-old Anthony and his 4-year-old brother, Chris, who had been placed in foster care after being found homeless and abandoned. "

The boys just stole our hearts and that was the beginning of our wonderful family of six beautiful children," Terri said.

The Moores became an inspiration to their church, and today their congregation has fostered more than 50 children and more than 20 have been adopted.

Currently, there are more than 400,000 children in foster care in the U.S., and more than 100,000 of them are available for adoption. This segment aims to give voice to these children by creating an intimate portrait of youth who need permanent loving homes.

The Children's Action Network was founded in 1990 by leaders in the entertainment industry to harness the power of the entertainment media on behalf of children. The special is a part of CAN's National Adoption Campaign to raise awareness of the joys of adopting and to find homes for the children who are waiting.